Brazil Contemporary presents a broad panorama of Brazilian culture and introduces the public to young Brazilian artists, architects and designers. The Architecture Institute introduces the public to one of the biggest cities in the world: Sao Paulo. The exhibition have 3 narrative threads. First is the story of the city, then the story about neighbourhoods, communities and well-known architecture projects by Oscar Niemeyer, Lina Bo Bardi, Paulo Mendes da Rocha and others. And finally there is the story of the Paulistanos and their dreams. 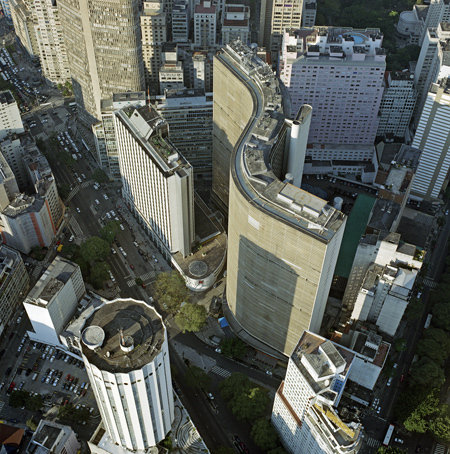 'Round Trip São Paulo'
Today, around 50% of the world's population lives in urban areas, and the number of city dwellers is expected to increase in the future. During Brazil Contemporary, the Netherlands Architecture Institute (NAi) introduces the public to one of the four largest metropolitan regions in the world: São Paulo.

The NAi asked architects, urban planners and the residents of São Paulo to reflect on their dreams for the city. Those of us living in the Netherlands can ask ourselves the same question. How do we manage our cities, our deprived areas, our public space, the Randstad? Rotterdam and the Netherlands can learn a great deal from São Paulo. The big question is what we, in the densely populated Netherlands, can learn from the example of this vast, dynamic city.

The equivalent of the entire population of the Netherlands lives in an area barely larger than the 'Groene Hart' (the relatively thinly populated area in the Randstad). Wandering through the streets of São Paulo it's easy to imagine yourself lost in a seemingly endless concrete jungle. The NAi presents the many faces of this gargantuan yet good-natured, friendly city. Because, beneath the almost overwhelming hubbub, lingers a São Paulo of vibrant cultures and people. With its different communities and neighbourhoods, São Paulo is many cities rolled into one. At first sight, there seems little coherence between the disparate elements. But nothing could be further from the truth. Rich and poor, high art and low culture and the residents of the different neighbourhoods are all intimately interwoven. With its melting pot of cultures and identities, São Paulo is the reflection of contemporary Brazil.

Experience life in São Paulo
The exhibition's primary focus is the everyday life of the Paulistanos, the residents of São Paulo. The NAi presents the metropolis in all its brutishness – and the warmth of its people, too. Scenes of the city and its inhabitants, filmed by students of the São Paulo film school, comprise the heart of the exhibition. Surrounded by different video screens, visitors are plunged into the almost unimaginably fast-paced life of the city; tumultuous but irresistibly exciting. Objects typical of São Paulo's streets will also be on display during the exhibition.

The NAi presents five cross-cuts of São Paulo; from the heart of the city to the periphery. São Paulo is the best illustration of the city as organic unit with multiple centres and constantly shifting functions.

1. Vale do Anhangabau: City of History
The 'old city' and original São Paulo, built in the valley by Jesuits as a missionary post. The city boomed after 1890 as the coffee trade grew, immigrants from all over the world poured in and industrialisation arrived.

2. Rail Zone: City of Industry
This zone reflects São Paulo' past as an economic giant. In the 19th century, the railway connected the harbour and city and was the lifeline of the lucrative coffee trade. The early nineteen-twenties marked the city's transformation into a city of industry. Today, many factories have relocated out of the city and the areas around the rail line are largely abandoned. The heart of the city now has a gaping hole. São Paulo's government is attempting to heal these 'wounds' with 'archipuncture' (architectural acupuncture). New cultural functions are being introduced to the zone in the hope of bringing regeneration.

3. Avenida Paulista: City of Finance
Built on the highest elevation in the city, Avenida Paulista is at the hub of the metropolis' wealth and power. It is a utopia: the concrete dream of how Brazil should be. It is the city that has it all: lush landscaped parks, spectacular museums and scintillating nightlife. This is the image channelled by the media to the world. Avenida Paulista is São Paulo's calling card.

4. Marginal do Pinheiros: City of the Multinationals
This area is outside the centre, along the freeway. Where slums once clustered, the land has been cleared to make way for business centres. Now, colossal office complexes of multinationals are cheek by jowl with gigantic shopping malls. Residents feel safe in these closed communities. In the hands of private property moguls, Marginal do Pinheiros is the hub of feverish building activity; office blocks and apartment buildings spring up, unregulated by the municipal authorities.

5. Estrada de Itapacerica: Do-It-Yourself City
In this informal urban zone, it is the residents who design and build the city. Here, too, the state maintains its distance. The favelas – slums – and poorer districts form a cordon around the city interrupted now and then by 'gated communities' with luxury villas, tall fencing and round-the-clock security. For some inhabitants life is mainly a question of survival, and they go about it with terrific verve and creativity. Despite Estrada de Itapacerica's reputation as a brutish violent neighbourhood, it is a closely-knit community that places great value on human dignity.

The architecture of the city is the life blood of the city's identity, its narrative thread. In the years after the Second World War, Brazil was in the grip of euphoria. The West had taken a battering. Brazil was poised to take up the baton as an international economic and cultural world leader. The architecture of Oscar Niemeyer and Lina Bo Bardi was trailblazing and modern. Now, fifty years later, Brazil is struggling to ease off the yoke of its modernist past. There is no all-embracing vision. While the cities' exponential growth is calling out for the 'the city' to reinvent itself, arriving at a new master plan for São Paulo has been proving a struggle. What challenges does this pose for architecture?

Publication
NAI Publishers will release a richly illustrated full-colour publication in Dutch/English. The volume presents a picture of the diversity of Brazilian culture and contains contributions by Paul Meurs, Jaap Guldemond, Frits Gierstberg and others.

Four Rotterdam museums – Museum Boijmans Van Beuningen, the Netherlands Architecture Institute, the Netherlands Photo Museum and Kunsthal Rotterdam – are bringing the rich culture of Brazil to the city on the Maas. Brazil Contemporary – Contemporary art, architecture and visual culture presents every facet of Brazilian culture in three exhibitions, a publication, and a programme of activities.

Brazil is inspiring, astounding, amazing. It is one of the largest countries in the world, with vast cities of millions of inhabitants that defy the imagination. Brazil is also developing at breakneck speed and is one of the economic giants of the future. But Brazil has its downside too: the depletion of the rainforest, the enormous contrast between rich and poor, the favelas. These phenomena are culturally reflected in an exciting cocktail of high and low art, of street art and politically committed art, and of different art disciplines and traditional craftsmanship. Brazilian culture will go to your head.

After the success of China Contemporary (2006), the three museums have decided to join forces again to focus on a country that has emerged as a global player in economic, social and cultural terms within a short period. Brazil Contemporary presents a broad panorama of Brazilian culture and introduces the public to young Brazilian artists, architects and designers.

In conjunction with Rotterdam Festivals, the Rotterdam summer will be a more sultry one with Brazilian jazz, films, street art and a special edition of the Summer Carnival.