The visual culture of Brazil. Brazil Contemporary presents a broad panorama of Brazilian culture and introduces the public to young Brazilian artists, architects and designers. Photo Museum zooms in on the rapidly changing Brazilian visual culture with its mixture of high and low, elitist and populist, artistic and applied. The exhibition shows not only photography, but also other old and new media, television and internet, with an excursus on fashion and design. 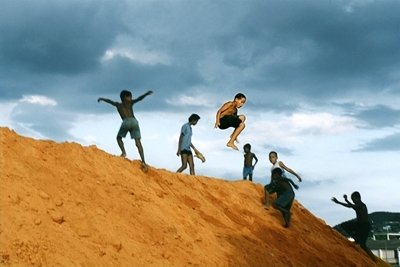 The Nederlands Fotomuseum will be focusing on the rapidly changing Brazilian visual culture. With photography, video, design, games, fashion and magazines, the exhibition reveals that, in Brazil, visual culture is a dynamic mix of high and low, elitist and populist, artistic and applied arts. Brazilian society proves a fertile source of material for much of the media and for many artists. A recurrent theme in the media and in the work of artists and photographers is the gulf between rich and poor. A number of works in the exhibition examine life in the favelas – the slum districts – of São Paolo and Rio de Janeiro. Consisting of a number of different sections, the exhibition in the Nederlands Fotomuseum has been designed to be viewed in random order.

Photo series ‘Paulistas’ by Cia de Foto
In São Paolo many young photographers have united to work in collectives. When out photographing on the city streets, it is safer to work in groups rather than alone, and working as a collective makes larger projects easier to realise. These collectives commonly reject the clichéd images that proliferate in the mainstream media and challenge the codes of traditional photo-journalism. One of the collectives is Cia de Foto, whose work includes the series ‘Paulistas’. Photographed on the Avenida Paulista, ‘Paulistas’ is a sequence of street shots in which the photographers utilised the effect of sunlight glancing off the skyscrapers.

Photo project ‘Viva Favela’
The media habitually portrays inhabitants of the favelas as violent and criminal. In reality, not all residents fit the drug-trafficking, crime-seeking stereotype. Many are members of organisations and collectives that set up and run education projects for residents and their – often disadvantaged – children. ‘Viva Favela’, a photo project by five photographers, has been selected for Brazil Contemporary. Taken by photographers who themselves come from low-income communities, the images present an uplifting portrait of life in the favela.

Zupi magazine
Zupi, a design magazine focusing on artistic and experimental artwork, quadrupled its circulation from 3,000 to 15,000 in just a few years. Conceived by young designer Allan Szacher, this runaway success is typical of Brazil’s creative industries. Published quarterly, the magazine promotes talented artists from all over the world: a quirky cocktail of art, photography, graphic design and cartoons. The Zupi editorial team is designing a spatial presentation in the spirit of the magazine especially for the Nederland Fotomuseum. Besides Zupi the exhibition has other examples of graphic design, innovative projects testifying to Brazil’s long tradition of high calibre graphic work.

Selection from Gabriela de Gusmão Pereirra’s visual archive ‘Rua dos Inventos’
Within a short space of time, artist and photographer Gabriela de Gusmão Pereirra gathered together an unusual visual archive under the title Rua dos Inventos (‘street of inventions’). In the streets of Rio de Janeiro she photographed the inventive structures fabricated out of ‘useless’ materials by street vendors, beggars and the homeless to make their everyday life a little more comfortable or to display the small items they have to sell. The ingenuity and creativity they put into these constructions has become a vital aspect of their street survival skills.

Games in collaboration with the FILE festival
FILE, the Brazilian festival for the electronic arts, has joined forces with the Nederlands Fotomuseum to present a selection of recently developed computer games and interactive installations. Visitors are of course invited to have a go and try the games for themselves.

Four Rotterdam museums – Museum Boijmans Van Beuningen, the Netherlands Architecture Institute, the Netherlands Photo Museum and Kunsthal Rotterdam – are bringing the rich culture of Brazil to the city on the Maas. Brazil Contemporary – Contemporary art, architecture and visual culture presents every facet of Brazilian culture in three exhibitions, a publication, and a programme of activities.

Brazil is inspiring, astounding, amazing. It is one of the largest countries in the world, with vast cities of millions of inhabitants that defy the imagination. Brazil is also developing at breakneck speed and is one of the economic giants of the future. But Brazil has its downside too: the depletion of the rainforest, the enormous contrast between rich and poor, the favelas. These phenomena are culturally reflected in an exciting cocktail of high and low art, of street art and politically committed art, and of different art disciplines and traditional craftsmanship. Brazilian culture will go to your head.

After the success of China Contemporary (2006), the three museums have decided to join forces again to focus on a country that has emerged as a global player in economic, social and cultural terms within a short period. Brazil Contemporary presents a broad panorama of Brazilian culture and introduces the public to young Brazilian artists, architects and designers.

In conjunction with Rotterdam Festivals, the Rotterdam summer will be a more sultry one with Brazilian jazz, films, street art and a special edition of the Summer Carnival.