Borrowed Light. A spectacular landscape with palm tree sculptures made from aluminium and stainless steel. In the video installation "Horror Vacui" the artist interweaves scenes of a rehearsal with a Latin band he founded with various Afro-Cuban musical rituals. 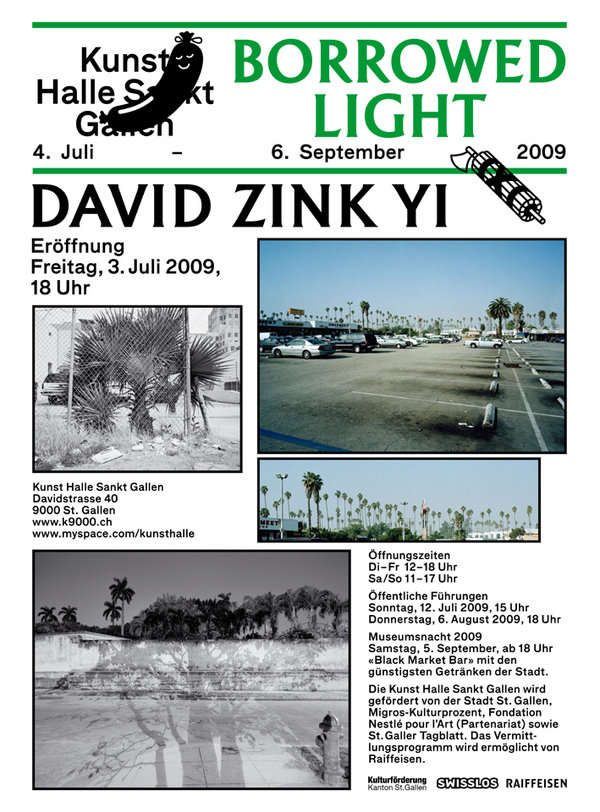 With "Borrowed Light" we are pleased to present the latest works of the Berlin-based Peruvian artist David Zink Yi in a summery exhibition at the Kunst Halle Sankt Gallen. An examination of various multilayered aspects of identity formation is at the centre of the sculptural and filmic productions created in years-long development processes. In his work Zink Yi treats identity as an abstract rather than only a cultural process.

Right at the beginning visitors find themselves in a landscape of artificial palm trees, reminiscent of urban space in many tropical and sub-tropical cities on the American continent. However, they are clearly recognisable as sculptures: they are idealised and scaled-down reproductions of the "Washingtonia Robusta" variety of palm. They are made of aluminium and stainless steel and were produced at the Kunstgiesserei St. Gallen (Art Foundry). Entitled Neusilber (New Silver), they are about 3.5 metres tall. Zink Yi has produced a spectacular installation which, through its spatial arrangement, creates a unique atmosphere between natural realism and sensuous artificiality. With their sharp, finely worked leaves the objects make it possible to experience the explosion-like crowns of the trees, which in urban context are at a height of 25 metres, in scaled-down form, resulting in a rearrangement of space and its proportions.
The content of the photographic work Borrowed Light (Twilight II) ties in with the installation. It was created during a full-moon night in Havana and shows the shadows of a tree which falls along a street and the wall running along it with the towering palms behind. The black-and-white image is illuminated from behind by natural light making it pulsate in numerous shades depending on the time of day. When viewing the work it is fully brought out by the interplay of two sources of light – the artificial light in the exhibition room and natural daylight with its unexpectedly strong effect on the baryta paper – and it subtly points to the fundamental nature of photography, which is nothing other than a physical light phenomenon. The positioning of the image become sculpture brings to mind a window but with a contrary function in that it hinders light from entering the exhibition room and leaves it and the viewer in twilight.
The title of the photograph and also of the whole exhibition, Borrowed Light, indicates Zink Yi's position in the artistic process: as a listener and an observer he "borrows" light or – in the case of the rituals and band rehearsals in the video work "Horror Vacui" – music, after creating the framework for the performative moments.

In the two-channel video installation Horror Vacui in the last exhibition room Zink Yi analyses and pays homage to the role of music on the Caribbean island of Cuba – as an art form but also as a ritual moment. In the two-hour film documentary he interweaves scenes of a rehearsal with a Latin band he founded with various Afro-Cuban musical rituals. Cajon, Tambor Batá and Wiro, three different rituals from the Palo Monte and Yoruba religions, structure the video into three parts. The treatment of music rehearsals and religious moments on an equal footing shows that both musical activities and opportunities for the protagonists to express themselves spring - on an archaic level - from similar sources and make possible related feelings and states of mind. The title of the film – fear of emptiness – indicates that all the participants find their individual expression in intervals between the others. Each individual strives to fill the empty moments constructively, to take over roles which have not yet been allocated while at the same time participating in the structural development of the music and the rituals, ultimately creating a dense texture, a polyrhythm. "Horror Vacui" can be understood as an extended picture, without beginning or end. The viewer is brought into a state that remains constant on the basis of musical production and the emotions from which music is made and which, if possible, should be extended for so long until an abstract, timeless and space-less picture emerges.
David Zink Yi (*1973, Lima PE) studied at the Berlin University of the Arts and the Academy of Fine Arts in Munich. He has had solo exhibitions at the following institutions and galleries: Galleria Francosoffiantino Artecontemporanea, Turin (2007), Galerie Johann König, Berlin (2006), Museum Ludwig, Cologne (2006), FRAC Champagne-Ardennes, Reims (2006), Kunstraum, Innsbruck (2005), Künstlerhaus, Bremen and Hauser und Wirth, Zurich (2004). Zink Yi has also participated in numerous group exhibitions most recently at the GfzK – Galerie für Zeitgenössiche Kunst, Leipzig, Martin-Gropius-Bau, Berlin (2008), Centro Cultural Banco do Brasil, Rio de Janeiro, Kunsthalle, Dusseldorf, Malmö Konsthall, Malmö, Zern, Berlin and Hamburger Bahnhof, Berlin (2007).

For any enquiries or would like further information, please contact Giovanni Carmine (carmine@k9000.ch) or Maren Brauner (brauner@k9000.ch).