The Centre of Attention

The Centre of Attention, London

Pagan images of the last Queen of the British Isles by her indigenous subjects. The exhibition kicks off the Golden Jubilee season of HRH QE2 and the Silver Jubilee of Punk. There will be performances on the night. 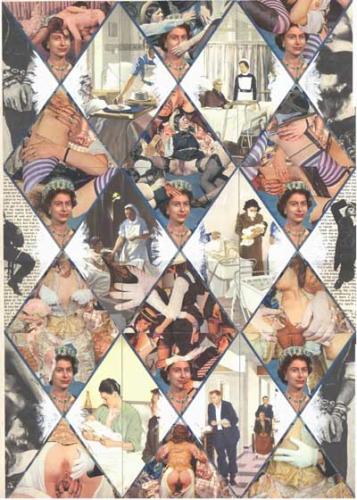 Pagan images of the last Queen of the British Isles by her indigenous subjects
on Friday 3rd May 2002, 7 to 9 pm at the Centre of Attention.

The exhibition kicks off the Golden Jubilee season of HRH QE2 and the Silver Jubilee of Punk. There will be performances on the night.

Calling for the abolition of the monarchy, the show and the gallery celebrate the spirit of punk, of bondage, of the do-it-yourself, cut-and-paste cultures that create an opposition and do not tolerate any conformity or status quo. Artists include:

Genesis P-Orridge was summoned to appear before the courts in 1974 charged with indecent mail. These infamous queen postcard images and new work will be on show.

Jamie Reid's stint as the Sex Pistols art director resulted in some of the most provocative images of rock music.

Banksy has been described variously as "a crude, mindless vandal" and "the new Andy Warhol". His unique form of stencilled graffiti has elevated cardboard cut-outs to a truly artistic level.

Brian Jones graphic designer and Jamie Reid's situationist accomplice is a regular magazine contributor. His Norma Queen brings out the Marylin in the Queen.

Tim Flitcroft is a young fine and video artist. He found his inspiration in prostitute's cards.

Josie McCoy leaves aside her celebrated EastEnders and Royle Family portraits to take on Lucien Freud's recent miniature of the Queen.

Jasper Joffe will do something big, probably at the last minute.

Gary O'Dwyer curated many of the shows at the Centre of Attention and has an upcoming exhibition in June with Deptford X.

Tai Shani will show a video featuring her Majesty.

Little Richard/Richard Torry infamous avant-garde performers and DJ will create a three-dimensional likeness of the Queen.

Mike Dawson is a prominent artist, gallerist and art editor based in Manchester. He will present a text-based portrait of the Queen.

Exhibition running to 30th May, Thursdays to Sundays, 2 to 7 pm

The Centre of Attention is a non-funded non-profit non commercial contemporary art gallery. "Their latest show to honour the Queen's jubilee is one of their best" says Dazed and Confused Magazine.

stampa
permanent link
The Centre of Attention
IN ARCHIVIO [17]