As exchange or blocking in between borders. 'Blockism' is a colloquialism used in hip-hop culture to describe belonging to a house, a block or a specific place; that is, a micro world. In SparwasserHQ thirteen artists from the academy in Odense, Denmark, explore clashes and mutual influences between different blocks. 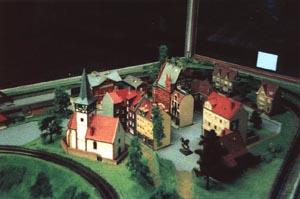 "Blockism" is a colloquialism used in hip-hop culture to describe belonging to a house, a block or a specific place; that is, a micro world. In SparwasserHQ from the 3rd of May to 8th of June 2002 thirteen artists from the academy in Odense, Denmark, explore clashes and mutual influences between different blocks.

"Blocks" are bricks in the wall of society and are often perceived as static, closed structures, despite their interconnectedness with other structures, or "blocks" within a dominant social system. Increasingly, the sense of being bound to a specific place is dissolving as openings for culture to cross borders emerge. The possibility of emancipation is one of the positive consequences of the subsequent cultural exchange. Increased movement between urban areas, in particular, produces new possibilities for exchange between various "blocks". The influx of new influences raises the question of the validity of categories such as nationality, gender roles, class, race, culture for defining one's identity.

On the other hand nationalism and cultural protectionism is the negative backlash against this contemporary cultural influx. The new political situation in Denmark and a large part of Europe does not support the development of fluid movement of cross-cultural influences. This tendency can be seen in several countries where governments are moving toward the right.

Berlin can be seen as a paradigm for the interaction, including the political, cultural, religious, and economic, between eastern and western, northern and southern cultures. Within these terms the present exhibition, BLOCKISM, questions whether culture is a stable entity.

All the artists in BLOCKISM share a common background as students at the art academy in Odense. But, by exhibiting in a broader context these artists explore the fluidity of boundaries between "blocks." Thus, a new space for discussion and questioning of identity and belonging emerges.

JESSE J.M. JENSEN in his installation "A Void" critically explores the development and trappings of identity by mimicking the structures of a small local society in Denmark.
" My Danish Collection" by SVEND-ALLAN SÃ˜RENSEN asks whether it is possible to expose national belonging through musical preference.
In the proverbs translated from Danish to German TINA SCHERZBERG plays with the transference of meaning between languages.
Identity as a cultural phenomenon is also the theme of the alternative models of German Meissner porcelain created by LOUISE SPARRE.
In the IDUN VARVIN's video installation, a Turkish man is poetically portrayed through the sayings and images of his environment.
JACOB Ã˜RSTED examines the concept of "homosociality" and the creation of identity in his film stills "Buddy Movies," dealing with intimate body relations between men.
ANDERS PETERSSON explores Berlin from a Scandinavian perspective in his photos, shot on location in Berlin.
Also ANDERS H. NISSEN works with alienation and inclusion in local places. In the installation "1:87" Nissen shows how an unfamiliar size can be adopted in another society.
NERMIN DURAKOVIC maps asylum centres of Denmark, which present themselves as ideal holiday places in a local language, not spoken by their clients.
The photo "Nunu" by CASPER MAARE also tells about the exclusion of the individual in society, and LINE T. KRISTENSEN reveals the division between the self and the others in her installation piece.
HENRIK B. KNUDSEN, among others, is playing with the poem ME/WE, showing that one cannot rely on one's surroundings for validation.
In the sound installation by JACOB BORGES a battle between a German and a Danish DJ takes place, mixing with the other artworks, crossing and "blocking" national belonging.