Take Care of Yourself. The Brazilian tour of the work - in which the artist invites over one hundred women to reinterpret a break-up letter - is a promotion of SESC Sao Paulo and Associacao Cultural Videobrasil, and is part of the Year of France in Brazil. The work is an example of how the narratives that the artist builds using literary, visual, and performance elements contain something that is too human to escape even the viewers who are less familiar with contemporary art. 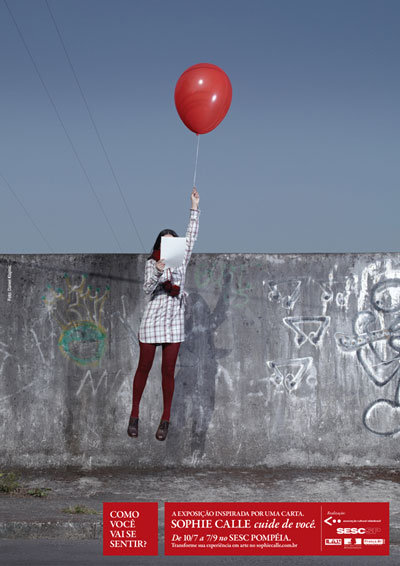 On July 10th, the Cuide de você [Take Care of Yourself] exhibition, by Sophie Calle, arrives in Brazil for a four-month season at SESC Pompeia, in São Paulo, and at the Museum of Modern Art of Bahia, in Salvador. The Brazilian tour of the work—in which the artist invites over one hundred women to reinterpret a break-up letter—is a promotion of SESC São Paulo and Associação Cultural Videobrasil, and is part of the Year of France in Brazil.

The partnering institutions' choice of Cuide de você takes into consideration the possibilities created by the broad spectrum of propagation of Sophie Calle's artistic practices. First shown at the Venice Biennale, in 2007, the work is an example of how the narratives that the artist builds using literary, visual, and performance elements contain something that is too human to escape even the viewers who are less familiar with contemporary artistic expressions.

"Sophie Calle's artistic quest is, in essence, a human quest. This makes Cuide de você, which is an example of the most instigating contemporary production, accessible to large audiences," says Solange Oliveira Farkas, president of Associação Cultural Videobrasil and director of the Museum of Modern Art of Bahia. To Danilo Santos de Miranda, chairman of the Brazilian Commissariat for the Year of France in Brazil and regional director of SESC São Paulo, Calle stands out for "being able to have art imitate life and life imitate art, leaving us impudently entangled in between dream and reality."

In order to take advantage of the identification that the work invites, a carefully devised educational project accompanies the exhibition. Geared towards various audiences, it seeks to increase the quality of the work's fruition by means of mediated paths; provides support to teachers interested in working with themes linked to the exhibition; and proposes activities that take Calle's work as a starting point to encourage the use of languages such as photography, text, and video.

The activities will involve educators and artists, such as the Brazilian duo Tetine, which will explore the creative process of Samba de Monalisa – Tetine vs Sophie Calle, created in a remote partnership with the artist, in a workshop. An invitation to play the games featured in the work of Sophie Calle is extended to the audience, which will be encouraged to produce poetic responses to the experience. This production will be shared in exhibitions and online.

The emphasis on educational action is in line with the partnership that was established between Associação Cultural Videobrasil and SESC – the Social Service for Commerce nearly twenty years ago. Created by entrepreneurs in the Brazilian trade and services sectors in 1946, SESC innovated by introducing new models for cultural action and highlighting the role of education as a prerequisite for social change. Associação Cultural Videobrasil, established in 1991, holds systematic actions aimed at fostering and disseminating contemporary art from the Southern circuit.

In addition to Cuide de você, Videobrasil and SESC São Paulo will release, in 2009, the fifth edition of annual contemporary art review Caderno SESC_Videobrasil and the sixth documentary in the Videobrasil Authors Collection, featuring Rio de Janeiro-based group Chelpa Ferro. In a partnership with the Armando Alvares Penteado Foundation (FAAP), the Videobrasil Residency Programme will receive Moroccan artist Bouchra Khalili to undertake an exchange that will result in an audiovisual work.

The main result of the partnership, the International Electronic Art Festival SESC_Videobrasil, which had its 16th edition in 2007, will happen again in 2011, after undergoing a deep restructuring process to adjust the event's format to the evolution of contemporary production.