Paintings from the David and Peggy Rockefeller Collection. An intimate installation that highlights a group of nine exceptional early modern European paintings. Thematically, the ensemble provides a small survey of portraiture, landscape, and still-life painting during the early period of modern art. Featuring examples of Post-Impressionist, Fauvist, and Cubist painting, ranging from Paul Cezanne to Pablo Picasso. 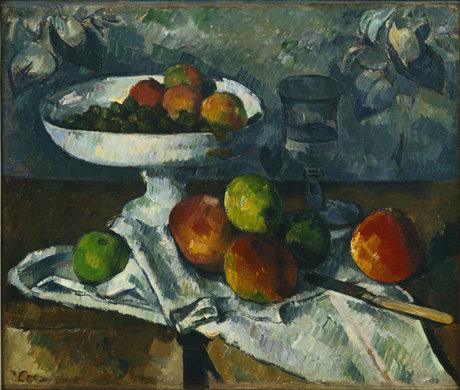 Mr. Rockefeller’s association with MoMA began in his childhood when he often visited the galleries with his mother, Abby Aldrich Rockefeller, who, along with Miss Lillie P. Bliss and Mrs. Cornelius J. Sullivan, founded the Museum in 1929. He has served the Museum with great distinction in many capacities, including two terms as Chairman of the Board of Trustees and in his present position as Honorary Chairman.

The installation begins with four works associated with Post-Impressionism: Cézanne’s Still Life with Fruit Dish and Boy in a Red Vest (1888-90), Paul Gauguin’s Portrait of Jacob Meyer de Haan (1889), and Paul Signac’s Opus 217. Against the Enamel of a Background Rhythmic with Beats and Angles, Tones, and Tints, Portrait of M. Félix Fénéon in 1890 (1890).

Fauvist works by Henri Matisse and André Derain feature the radical color palette that the artists developed together in the summer of 1905 in Collioure, France. In Interior with a Young Girl (Girl Reading) (1905–06), Matisse painted his daughter Marguerite in nearly as many colors as the fruit on the table beside her. In Charing Cross Bridge (1906 or 1907), Derain ignores the customary gray of the London sky, rendering it instead with imaginative colors. These two works are followed by Georges Braque’s The Large Trees, L’Estaque (1906-07) and Raoul Dufy’s The 14th of July at Le Havre (1907). The installation concludes with Picasso’s cubist landscape The Reservoir, Horta de Ebro.