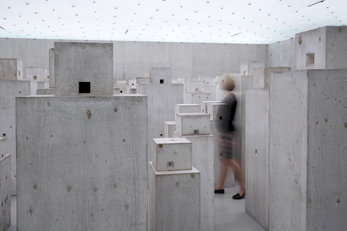 Antony Gormley is one of Britain’s leading contemporary sculptors focusing on the human body as site. The exhibition at KUB brings together four major work series from Gormley’s oeuvre: the Expansion works, Allotment, Critical Mass, and Clearing. Embedded in the context of Peter Zumthor’s architecture, the works challenge the fine line in the human psyche that marks the mental balance between asserting oneself as an individual and being contextualized by architectural space.

Over the last 25 years Antony Gormley has revitalized the human image in sculpture through a radical investigation of the body as a place of memory and transformation, using his own body as subject, tool, and material. Since 1990 he has expanded his concern with the human condition to explore the collective body and the relationship between self and other in large-scale installations like Allotment II and Critical Mass II, both of which are presented at KUB this summer. Gormley’s recent work increasingly engages with energy systems, fields, and vectors, rather than mass and defined volume. This is evident in the dynamic work Clearing V, which pushes against the gallery walls, ceiling and floor, and fills the second floor of KUB.

Gormley’s work has been exhibited extensively, with solo shows throughout the UK in venues such as the Whitechapel, Tate and Hayward galleries, and internationally at museums including the Louisiana Museum in Humlebæk, the Corcoran Gallery of Art in Washington DC and the Kölnischer Kunstverein in Germany. Blind Light, a major solo exhibition of his work, was held at the Hayward Gallery, London, in 2007. He has participated in major group shows such as the Venice Biennale and documenta 8 in Kassel. Angel of the North and, more recently, Quantum Cloud on the Thames in Greenwich, London, are amongst the most celebrated examples of contemporary British sculpture. Gormley was awarded the Turner Prize in 1994, the South Bank Prize for Visual Art in 1999 and the Bernhard Heiliger Award for Sculpture
2007.

Gormley’s Expansion works began with the obsession with renegotiating the skin: questioning where things and events begin and end. All forms become egg-shaped if their skin is repeated, achieving an equilibrium between stasis and potential. The Expansion works apply this process to the body in dynamic motion, moving bodies either in self-locomotion or in positions where the body is the subject of movement. Body and Fruit are derived from a body-mold in a clasped diving position. To quote Gormley:

“I discovered that it was possible to extend the form through the application of a consistent measure by using wooden spars radiating from nodal points at the extremities of the body. They were linked together at their outer ends to form a continuous surface where the feet, hands, buttocks, and head become the foci of a number of domed forms that coalesce.”

The measurements of 300 local people of Malmö, Sweden, were used to construct 300 five-centimeter-thick rectangular concrete body cases, with integrated rectangular head cases, and apertures at the mouth, ears, anus and genitals. The “rooms” of Allotment are the minimum space necessary to accommodate a particular living individual, which substitute the second body (that of architecture) for the first. They are vertical meditation cells for the absent bodies of a real community. With the pieces laid on a grid path system the composite work evokes a surrogate cityscape. Some are closely packed next to each other, some less so. The viewer, having apprehended the work initially as a whole, is able to make his/her way through the composition, engaging with pieces intimately.

Clearing V consists of up to 12 kilometers of raw metal rod that arc from floor to ceiling and wall to wall, creating a three-dimensional drawing in space. The installation acts as a vector field, encouraging the viewer to move through its structure disrupts the authority of a single-point perspective, necessitating instead a constant renegotiation of the visual field: “I was trying to destroy the fixed coordinates of a room and make a space/time continuum (a line without end) that was both a thing and a drawing,” says Gormley.

Critical Mass II is made up of 5 casts of 12 positions: ground-hugging, crouching, fetal, squatting, sitting, kneeling, standing, mourning – an ascent of man ranging through the complex syntax of the body. The bodyforms were cast from the outside of a plaster mold and all the imperfections of the mold surface are reproduced on the finished work, as are the signs of the loose pieces in the sand mold, the flash lines that exist between them, and the out- runners of the metal-pouring which are integrated into the surface, declaring their industrial birth. The work is an anti-monument evoking the victims of the twentieth century. It also communicates the useless status of sculpture itself. Critical Mass II was made in direct response to a specific building, the Remise, an old tram storage station in Vienna. The work continues to activate and destabilize the architectural contexts in which it is presented.

In conjunction with its exhibition of the work of the British sculptor Antony Gormley the Kunsthaus Bregenz is publishing a catalogue that presents a comprehensive look at the pieces on display. One of Gormley’s central themes is the human body, which he uses in ever new constellations of large sculptural ensembles or as individual figures to investigate and call into question issues of space and perception.

The essays are written by the philosopher Marcus Steinweg, who examines the sculptures from an epistemological standpoint, Antonio Damasio and Yilmaz Dziewior, who explores Gormley’s work from an art historical point of view.