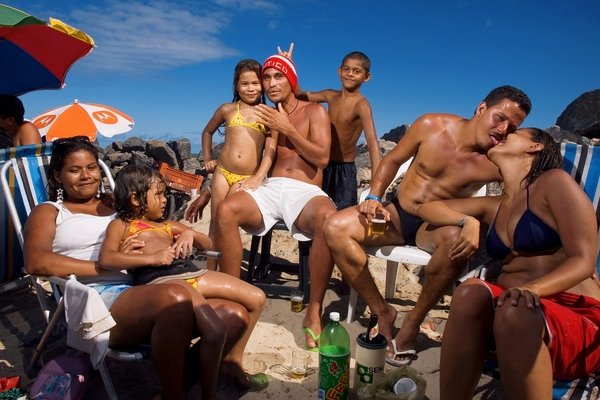 Curated by Domein curator Roel Arkesteijn in collaboration with Cristiana Tejo, the MiM manager in Recife.

The Brazilian Summer in Museum Het Domein highlights the special focus of the Made in Mirrors exchange project: Brazil. Museum Het Domein, Vitamin Creative Space in Guangzhou (China) and the Museu de Arte Moderna Aloísio Magelhães (MAMAM) in Recife (Brazil) have been working in conjunction for the last two years. A number of artists and curators from Recife spent time in Sittard, and Dutch artists and museum staff visited Brazil.

The project in Het Domein highlights a group of primarily young Brazilian artists who explore socio-political issues through interventions in public (urban) space and in social structures. Their slightly anarchical work questions the functioning of economic systems, reflects on the position of the individual within society and subverts canonical art works. In many cases, this is the first time their work has been shown in the Netherlands, and many artists have created new pieces especially for the exhibition.

To place them in context, the exhibition also includes work by two seminal artistic figures of an older generation, Cildo Meireles (1948) and Artur Barrio (1945) who continue to have a formative influence on the younger group of Brazilian artists. Both are internationally renowned as pioneering installation artists and key exponents of conceptual and political art. Meireles is represented by various works, including objects from his series Insertions into Ideological Circuits, which date from the nineteen-seventies. He printed politically critical messages onto coca cola bottles and banknotes, putting the objects back into circulation. Barrio is predominantly known for installations that invite the viewer’s participation and which blur the boundaries between life and art, the street and the museum. For the exhibition in Het Domein, Barrio will produce a new site-specific installation that will create an all-round sensory experience for the viewer.

The exhibition extends beyond the walls of the museum. At various sites throughout the city, the young photographer Bárbara Wagner, who previously worked in Sittard during an exchange project, will be presenting billboards of photos from her series Brasilia Teimosa. This urban beach in Recife attracts the loners and more eccentric inhabitants of the city – it’s the only place they have a sense of freedom. Artist collective GIA (Grupo de Interferencia Ambiental) from Bahia will rouse Sittard with unexpected interventions in the public space. Registrations of similar interventions will be presented in the museum.

To mark the occasion of Bárbara Wagner’s billboard project, Het Domein and Made in Mirrors are co-publishing a monograph on Wagner’s work to date. A small selection of the photos Wagner took in Guangzhou and Sittard during the exchange project will also be on display at the DSM Offices on Poststraat in Sittard from 4 July to 13 September.

Parallel to the visual art programme, Het Domein will be presenting activities centring on music and film.

Museum Het Domein
Kapittelstraat 6, Sittard The Netherlands
Opening hours
from Tuesday through Sunday from 11 am till 5 pm.
Extra opening days: Easter Monday, Whit Monday, the day after Christmas day and the last day of the year
Admission
Adults: € 4,00
Discount cards: € 2,00
Groups of a minimum of 15 persons: € 3,00
Free admission:
Youngsters up to 18 years, people with a Museumjaarkaart, Friends of Het Domein and everybody on the first sunday of the month