Artists and War - War and Art

On show the beginning of the Second World War, 70 years on. The Works on Paper gallery will show compositions by 20th-century artists who dealt with war as their theme. The exhibition starts with Kathe Kollwitz who, several years prior to the First World War, took up this theme in her depictions of the Peasant's Uprising and Weaver's Revolt, and continues with works by Otto Dix, Max Beckmann, Ruth Francken and many other artists. 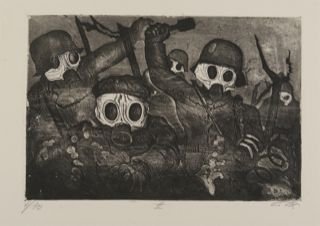 The beginning of the Second World War, 70 years on, will be marked by a special exhibition at the Sprengel Museum Hannover. The Works on Paper gallery will show compositions by 20th-century artists who dealt with war as their theme.
The exhibition starts with Käthe Kollwitz who, several years prior to the First World War, took up this theme in her depictions of the Peasant’s Uprising and Weaver’s Revolt. Her works express premonitions of the atrocities which were to ensue.

Ernst Barlach’s graphic illustrations for the magazine ‘Kriegszeit – Künstlerflugblätter’ (Wartime – Flyers by Artists) from 1914 were still full of patriotic sentiments and do not reveal any inkling of the real disasters yet to come. also started out during the First World War with powerful compositions, full of hope and intended to further his art. The sobering effects of the events that followed made him realise that the tragedy of this conflict would develop well beyond the powers of human imagination and comprehension. In 1918, after the war had cost the countries involved millions of deaths, with masses left injured or crippled, Beckmann’s works became filled with sarcasm, showing children still playing war games: a fateful view of the future.

Otto Dix experienced the entire war from the warfront. Some years after the end of the conflict, he used his drawings and sketches from the field to compile a comprehensive portfolio with 50 works. The viewer is confronted in a brutally honest way with horrific scenes he himself had to witness. Bernhard Heisig’s illustrations for Ludwig Renn’s novel ‘Der Krieg’ (The War) are based on such works. His art continued with all aspects of human tragedy during Nazi Germany and the Second World War in his series ‘ Der faschistische Alptraum’ (The Fascist Nightmare), first published in 1965/66 and revised and republished 1975/76. Alfred Hrdlicka’s comprehensive series of 53 works, entitled ‘Fast wie ein Totentanz – Radierungen zum 20. Juli’ (Almost Like the Dance of Death – Etchings to mark 20 July), deals with the Third Reich’s totalitarianism, the assassination attempt on Adolf Hitler, the trials as well as executions of those who showed resistance.

Pablo Picasso created in his monumental mural ‘Guernica’ one of the most impressive anti-war symbols in art form and the suffering it causes to civilian populations. ‘Femme qui pleure’, (Woman Crying), is a detailed study from this painting. Ruth Francken, in her series ‘Dans les flammes’ (In the Flames), dealt solely with the totalitarian and corrupt regime of South Vietnam’s Ngo Dinh Diem, the self-immolation of the Buddhist monks in protest against the dictatorial government, American occupation and the war that was about to start.