Exploding borders in art, technology and society. In the cross-disciplinary exhibition sk-interfaces, twenty international artists reflect on how modern technosciences have altered our relationship with the world: telepresence, digital technology, speculative architectures, bio-prostheses, tissue culture or transgenics - for the artists, they are not mere topics but tools, methods and media to appropriate. 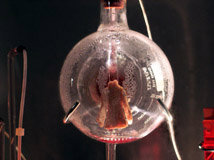 Skin is our natural “interface” with the world – more and more, however, technological extensions are taking over its role; “interfaces” create both new freedoms and new constraints. In the cross-disciplinary exhibition sk-interfaces, twenty international artists reflect on how modern technosciences have altered our relationship with the world: telepresence, digital technology, speculative architectures, bio-prostheses, tissue culture or transgenics – for the artists, they are not mere topics but tools, methods and media to appropriate. They test the permeability of the borders between disciplines, art and science. Their interfaces connect us with other species, put satellite bodies up for debate, destabilize our conception of what it means to be human today, and create evolutionary scenarios confronting the technological pressure to adapt and its socio-political implications.

As a natural inventor of the artificial, Homo Sapiens compensates for its imperfections through the use of technology. Arguing for the naturalness of the media created to this end, theorist Marshall McLuhan once suggested that they be understood as bodily extensions per se – something not unlike an electronic skin spanning the world in which inner and outer were no longer clearly distinguishable. Yet, these prosthetic extensions come at the high price of “auto-amputation” , for each prosthesis permits other senses and states of consciousness to be numbed and to atrophy. Today, in the context of the so-called Life Sciences, media and technological interfaces can no longer be considered merely as telecommunicative, digital, or human-machine interfaces; in the age of bio-facticity, even that which apparently grows naturally is now technologically induced, producing biological artefacts.

In view of the utopias and dystopias this inspires, it is no surprise that artists take up the material, function and metaphor of skin as the original, semipermeable and active membrane. They contest the predominating utilitarianism with subversive alienation, aesthetically, poetically and provocatively. Sometimes they wrest from the technological a holistic impulse, sometimes an ecological illusion in which humans admit their responsibility rather than isolate themselves in their alleged superior status. Hence, sk-interfaces examines above all the “ – ”: the in-between-space of our contemporary ontological grey zones.

In cooperation with FACT (Foundation for Art and Creative Thechnology), Liverpool With the participation of CRP Santé, CRP Gabriel Lippmann, the laboratory ‘Cytosquelette et plasticité cellulaire’ / University of Luxembourg, the UK Centre for Tissue Engineering / University of Liverpool, SymbioticA / University of Western Australia and the Verbeke Foundation Kernzeke.