The all-day open house festivities celebrating its 40th anniversary year will be packed with fun events; the Empire State Building will shine its world-famous tower lights in the museum's signature mango-yellow heralding the reopening to the entire city. A landmark exhibition examines pioneering Caribbean and Latin American artists who lived in New York City before World War II and shaped the American avant-garde. In the new Carmen Ana Unanue Permanent Collection Galleries over 100 works trace the museum's history and the artistic contributions and milestones that have been part of El Museo's four decades. 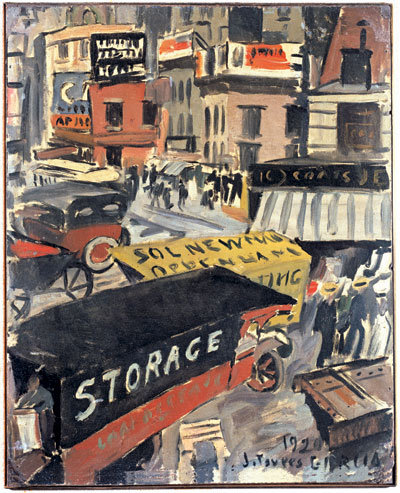 El Museo del Barrio will open with a bang on October 17! The all-day open house festivities celebrating its 40th anniversary year will be packed with fun events taking place throughout its whole beautifully renovated building, Latin music shows by children and adults in the brand-new courtyard and the theater, children book readings and art-making workshops at El Taller, a preview of Soledad O'Brien's upcoming documentary Latinos in America, and walking tours around el Barrio will be only part of the fun. Join us!!

In celebration of El Museo’s 40th anniversary and reopening, the Empire State Building will shine its world-famous tower lights in the museum’s signature mango-yellow from Friday, October 16 through Sunday, October 18, heralding the reopening to the entire city.

Between 1900 and 1942, New York City was the site of extraordinary creative exchange where artists could share ideas in a global context. The swiftly-changing urban landscape before and between the World Wars inspired the erosion of artistic boundaries and fostered a new climate of modernist experimentation. Nexus New York focuses on key artists from the Caribbe an and Latin America who entered into dynamic cultural and social dialogues with the American-based avant-garde and participated in the development of a new modern discourse.

This ambitious exhibition will present for the first time together more than 200 important works by artists from Bolivia, Brazil, Chile, Cuba, Dominican Republic, Ecuador, El Salvador, Guatemala, Mexico, Peru, Puerto Rico, Uruguay, as well as, U.S. and European artists working in New York. Contextual material—such as period photographs, original magazines and books, reproductions of poems, writing, and other documentary materials— will also be on display to elucidate and bring to life the nature of these historical, collaborative, and experimental environments.

“Nexus New York will not only be a landmark in Caribbean and Latin American scholarship, but it will allow, for the first time, a close study of the astonishing exchanges between artists of the Americas, New York, and beyond, and will lead to a richer understanding of American modernism,” said Deborah Cullen, Director of Curatorial Programs and Curator of the exhibition.

Through both chronological and simultaneous groupings that focus on sites of artistic contact, visitors will explore diverse locations around New York, emphasizing the institutions, schools, and groups that galvanized the cosmopolitan activity in which Caribbean and Latin American artists played key roles.

The premiere exhibition in our new Carmen Ana Unanue Permanent Collection Galleries celebrates El Museo's 40th anniversary. Over 100 works created by a cross-section of Latino, Caribbean, and Latin American artists trace the museum's history and the artistic contributions and milestones that have been part of El Museo's four decades. Highlighting the strengths of the collections, this installation ranges from artifacts of the ancient Taíno people and their legacy to traditional objects, postwar and contemporary art, including graphics, photography and mixed media installations.

Starting with the Foundation of El Museo and works acquired from its inception in 1969 through approximately 1977, the first section will highlight the cultural significance of El Museo’s beginnings, a period coinciding with the later part of the Civil Rights Movement, which saw a heightened interest and awareness in the traditions of Caribbean, Latino and Latin American art, culture, and tradition.
Anchored in the predominantly Puerto Rican community of Spanish Harlem, El Museo del Barrio – “The Museum of the Neighborhood” – emerged during this period as a center for the preservation and promotion of its cultural expressions amidst the struggle of minority groups for a better representation within U.S. culture. Highlights in this section include photographs by El Foco co-founder Roger Cabán such as Bodega,
East 110 Street, NYC; a video of Pietro Petri’s poetry reading of “Puerto Rican Obituary” in support of the Young Lords Party’s takeover of First Baptist Church to start a free breakfast program; Lolita Lebrón Freedom Fighter by co-founder of Taller Boricua Marcos Dimas; and Children of Treblinka, a mixed media work made out of debris from el Barrio by Raphael Montañez Ortiz, El Museo’s founding director.

11:00 am: RIBBON CUTTING - The Courtyard
El Museo kicks-off its grand opening celebration with a ribbon cutting ceremony. Doors open to the public for a full day of free admission and fun activites, shopping at La Tienda, and a bite and drink at the new El Café!

11:00 – 12:00pm: COLORIN COLORADO - El Teatro
Mariposa, renowned poet and writer hosts children storytelling! Estrellita Says Goodbye to Her Island, is a lovely story by Samuel Caraballo about a girl from Puerto Rico and her experience when she leaves her Isla del Encanto,

11:00 – 12:45am: STARTING WITH A BAND! - The Courtyard
To celebrate El Barrio's musical heritage, El Museo welcomes two live performances: at 11am, Zon del Barrio, playing a great variety of Latino music genres, including African Diaspora, New York urban, and more; and at 12pm, Yerbabuena, the Boricua-roots band based in New York City.

11:00am – 3:00pm: QUE BONITA BANDERA! - El Taller
Families come together in El Taller to create their own version of a flag that represents their family, barrio, culture and/or identity.

1:00 – 2:00pm: COLORIN COLORADO - El Teatro
As a continuum to the previous book reading, El Museo presents Estrellita in the Big City by Samuel Caraballo. In this story, also read by Mariposa, Estrellita narrates to her Abuelita her experiences upon arriving in NYC.

3:00 – 4:30pm: SALSA IS NUYORICAN - El Teatro
Take a musical journey with José Obando, renowned ethnomusicologist, through the History of Salsa in El Barrio. Preceded by a live performance by The Harbor Latin Youth Ensemble, comprised of the most advanced students ages 12-19 enrolled in the Harbor Conservatory's Pre-Professional Latin Music Program. A dose of laughter will be provided by Puerto Rican stand-up comic Bill Santiago, host and MC for the afternoon.

1:30 – 3:30pm and 4:00 – 6:00pm: DESTINATION EL BARRIO - El Barrio
El Barrio has been home to El Museo for 40 years. Come explore its impact on our history and development through walking tours around El Barrio! Highlights include the Graffiti Wall of Fame and local murals. All tours start in El Museo’s lobby.