The environment created by Marc Camille Chamowicz contains the quintessence of a multi-faceted artistic oeuvre. In the Secession's Galerie space. In his exhibition at the Secession, Chaimowicz refers specifically to a long stay in Vienna in 1982 as part of the Humanic-Artist-in-Residence-Programme. Michael Ashkin shows a video and a series of sculptures made of recycled cardboard representing proliferating settlements, designs for public squares, and prison architectures.The works of the Romanian artist-duo Mona Vatamanu & Florin Tudor are based on a politics of remembering diametrically opposed to the collective trauma that lies in forgetting and repressing the events of recent Romanian history. 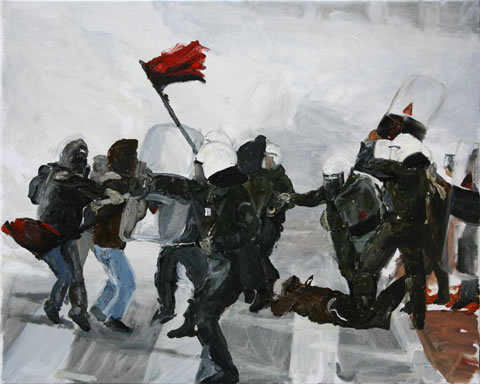 A floorscape of carpets with floral and abstract ornamental patterns in soft pastel shades is spread out in the Secession’s light-flooded white cube. The large-format asymmetric carpets lie on bases of different heights whose vertical and horizontal surfaces are at crooked angles, calling into question the functionality of the tufted carpets at the same time as elevating them to the status of autonomous artworks. A multitude of parasols in variously patterned fabrics are arranged on and beside the carpets. Wall designs which filigree patterns and colour palette indicate the artist’s style decorate the side walls. A theater curtain and Curtain (For MvdR) from the last Berlin Biennale (dedicated to Mies van der Rohe, 2008) give the show a vertical dimension. A few furniture pieces and a painting in ten parts are scattered within the space.

This environment created especially for the Secession out of primarily new works contains the quintessence of a multi-faceted artistic oeuvre. Over the past four decades, from performances and installations in the 1970s through designs for furniture, ceramics, and patterns for mass-produced consumer items, Marc Camille Chaimowicz has developed an unmistakable formal idiom and signature style. His belief in beauty and lightness, elegance and cultivation is expressed in his preference for graceful curves, delicate forms, and a characteristic palette of pastel shades. This nuanced approach reflects the ambiguity of the artwork, which is always situated somehow “in-between”.

In what he terms “choreographies”, Chaimowicz takes pleasure in breaking down the hierarchy of applied and fine art. His pattern designs appear rooted in the painterly vocabulary of modernism, especially that of French painting, to whose legacy he feels attached. They are used as patterns for wallpaper, carpets, and textiles. As at the Secession, however, they may also cover entire walls or feature as components in the artist’s publications. His furniture pieces tread the often indistinct line between consumer item and art object. In this exhibition, this is made especially clear by the two dressing tables Deux coiffeuses (peut-être pour adoles-cents), l’une habillée, l’une pas (2008), but also in Dual, a kind of reversible chair combining a recliner and, when turned through 90 degrees, an armchair.

In his exhibition at the Secession, Chaimowicz refers specifically to a long stay in Vienna in 1982 as part of the Humanic-Artist-in-Residence-Programme. At this time, his engagement with the craft products of the Wiener Werkstätte and with Viennese architecture provided him with important stimuli. With its formal reduction to a two-dimensional plane, Vienna Tryptich, Leaning ... and Surrounded by Chorus Girls and Sentinels ... (1982), a work from this period included in the show, is paradigmatic for his development towards works and spatial compositions characterized by a condensed formal aesthetic.

In the 1970s, Chaimowicz made environments whose formal idiom drew on art history and the popcultural repertoire of glam rock: disco balls, spot-lights, fairy lights, and pop music on the one hand, on the other symbolically loaded elements from art history such as mirrors and flowers, used in works including Celebration? Realife and Enough Tiranny (both 1972). Together with his performances, these works stood in contrast to the purism of Conceptual and Minimal Art, making the artist one of the most important figures in the British high-subculture of the 1970s.

His artistic development is closely linked to the political and societal changes of the late 1960s and early 1970s. The student revolt of 1968, which Chaimowicz experienced directly in Paris, was a major influence. His main sources of inspiration were not the political left in Britain, which he initially observed with interest but soon rejected as authoritarian and dogmatic, but feminism and the gay liberation movement. His artistic focus in the early 1970s on the private/public divide and the domestic domain, with its traditionally female connotation, can be read as a radical emancipatory step.

To underline the fact that even in the exhibition context, artists do not find themselves in a sociopolitical vacuum sealed off from the outside world, Chaimowicz occasionally invites guest artists. For his show at the Secession, he has invited the Viennese architect Hermann Czech, whom he holds in high esteem, and the young British artist Simon Thompson.

Exhibition talk
Marc Camille Chaimowicz in conversation with Anette Freudenberger.
Exact date in January 2010 to be announced.
An Event by the Friends of the Secession

Catalogue
The exhibition will be accompanied by A Folio for Secession, an artist’s portfolio with five pattern sheets, a letter from Marc Camille Chaimowicz in facsimile, and an essay by Silvia Eiblmayr (German/English and French /English). Produced by the Secession, published in cooperation with Musée La Piscine, Roubaix.

In the Secession’s Galerie space, American artist Michael Ashkin is showing a video work and a series of sculptures made of recycled cardboard representing proliferating settlements, designs for public squares, and prison architectures. His model-like topographies are characterized by the many ways in which they combine the realism of documentary inventorizing with a formal idiom of subjectivity and internalization. They pursue an approach already present in his early photographs of post-industrial landscapes shown, among others, at DOCUMENTA11 (Kassel, 2002).

At the Secession, in the large-scale work Untitled (where each new sunrise promises only the continuation of yesterday), ... (2009) tailored to fill the Galerie space, Ashkin explores the logic of urban spatial organization between social ideals, structural necessities, and uncontrollable contingencies. The sculptural installation consists of a sprawling, seemingly random accumulation of simple houses, huts, and sheds. Rather than revealing a sense of town planning, the way the detailed architectural miniatures are arranged looks unintentional, temporary, and characterized by an absence of community. As such, it refers to the explosive expansion of urban spaces and to the related dynamics of appropriating terrain and participatory architecture.

Like Ashkin’s other sculptures, Untitled (where each new sunrise promises only the continuation of yesterday), ... is based on abstractions from aerial photos and finished buildings, possessing no specific identity in space-time. The distancing from reality inherent in any model is amplified by the monochrome material and the predefined perspectives of the plan and elevation views. The viewer’s gaze is lost in the remoteness of the horizon.

This presentation of the sculpture as a site for thinking about space has a counterpart in the video work Here (2009). In terms both concrete and metaphorical, it deals with the desert as a habitat, a threat, but also as a spiritual experience. By creating an interplay between the poetic, rhythmic text spoken by a voice-off and the visual representation of an empty interior, it becomes a space for projections in a double sense.

Catalogue
The first exhibition monograph on Michael Ashkin contains a chronology of key works, comprehensive documentation of the show, and theoretical texts by Anthony Graves and Elke Krasny. It is published in partnership with the College of Architecture, Art & Planning at Cornell University, Ithaca, New York.

MONA VĂTĂMANU & FLORIN TUDOR
ALL POWER TO THE IMAGINATION!

All Power to the Imagination! is a new installation specially developed for the Grafisches Kabinett and the facade of the Secession by Romanian artists Mona Vătămanu and Florin Tudor. In this work, the artist duo who have been working together since 2000 explore potentials of resistance, which they understand less as a dogmatic, didactic idea than as a subtle, poetic form of action. The artists’ interest in such an approach matches their skepticism towards political symbols and slogans which make a claim to truth.

The installation consists of several works in different media which are related in terms of both form and content. The room-filling installation in the Grafisches Kabinett centers on a floating stage with a fragmentary representation of the red and black flag of anarcho-syndicalism – now a global symbol for rebellion against hegemonic conditions within society. When stepping onto the double floor, visitors may feel a notion of instability. The resulting uncertainty symbolizes the social condition which has emerged as a consequence of a fundamental shift in values in the past twenty years.

The material density of the spatial composition contrasts with the immateriality of the film projection of Poem (2009). It shows the making of the banner with the words Trăiască şi înflorească Capitalismul! (“Long live and thrive Capitalism!”) which is mounted on the Secession’s facade. The text is a variation on the socialist slogan “Long live and thrive Socialism!” which was omnipresent in Communist Romania, thus reflecting the transformation from one system to another. The series of small-format paintings entitled Riots (2009) again refers to anarchist resistance in the form of its symbol, the red and black flag.

The works of Mona Vătămanu and Florin Tudor are based of a politics of remembering diametrically opposed to the collective trauma that lies in forgetting and repressing the events of recent Romanian history. In symbolic actions of visualisation and reparation, they campaign actively for a focus on and engagement with history. For the artists, this is essential to any understanding of today’s post-communist society.

Catalogue
The exhibition will be accompanied by a catalogue (German/English) with an essay by Adam Szymczyk and an interview with Mona Vătămanu and Florin Tudor by Jeanette Pacher.