A Question of Evidence

The exhibition incorporates a variety of artistic and cultural approaches that encompass diverse viewpoints on the nature and function of representation in the face of 'real' events and socio-political circumstances. Central to these works is the notion of evidence, which can be defined as the act of testifying or bearing witness in a broad cultural sense. Evidence is, in its fullest definition, a paradoxical and contested notion, as it may refer to a highly privatized object (image, symbol, artifact) that serves as a trace or indication of a past event or experience. 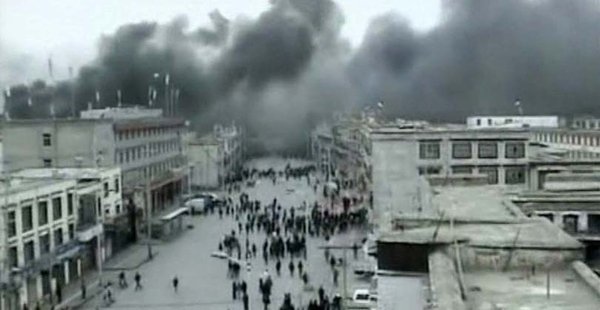 The exhibition incorporates a variety of artistic and cultural approaches - including moving image, still photography, text, archival material, installation, and theatrical performance-that encompass diverse viewpoints on the nature and function of representation in the face of "real" events and socio-political circumstances. Some participants present a side of their practice that is interdisciplinary, collaborative, or hybrid, as in the case of Khin Khin Su, Marine Hugonnier, Raqs Media Collective, and Amar Kanwar. Most of them, in fact, regularly collaborate with grassroots collectives that, faced with restricted channels of communication, manage to conduct research and disseminate information through Internet-based networks, video and film databases, open-source initiatives, and other means. The works in the exhibition exemplify the transformation of the concept of visual art to one of visual-intellectual culture or knowledge production. While restricted in its geographical scope - most participants live in South or Central Asia - the exhibition does not overlook, but rather illuminates the essential differences in the role and presence of artists and practitioners within the public realm in their respective contexts.

Central to these works is the notion of evidence, which can be defined as the act of testifying or bearing witness in a broad cultural sense. Evidence is, in its fullest definition, a paradoxical and contested notion, as it may refer to a highly privatized object (image, symbol, artifact) that serves as a trace or indication of a past event or experience. It can also indicate a sign acting as an “orientation” device, an anchoring object for (often) anxious and subjective testimonies. In the legal context it can be either object-based (an exhibit) or written or oral testimony, referring to an objectivist order or to the status of a subject / witness. Because it is derived from and overlaps with other disciplines—such as anthropology, ethnography, history, philosophy, religion, literature, politics, sociology, and law— the notion of evidence serves as a useful guiding principle in the analysis of the assembled works and practices, which cross genre lines—encompassing art, film, music, narrative, poetry, and performance—and involve the eclectic use of competing discourses.

Occupying a central position in the exhibition, Amar Kanwar’s extensive video installation The Torn First Pages (2004-8) manifests such concerns in terms that are poetic yet political. An ode to the thousands engaged in the struggle for democracy in Burma, The Torn First Pages is presented in honor of the bookshop owner Ko Than Htay, who was imprisoned for tearing out the first pages of all books and journals that contained ideological slogans from the military regime. The video installation directly, elliptically, and metaphorically engages themes of the struggle for a democratic society, contemporary forms of nonviolent resistance, political exile, memory, and dislocation. For Kanwar, the poetical and its nature as evidence are reconcilable by nature, as he states: “Imagine the formal presentation of poetry as evidence in a future war crimes tribunal. Imagine nineteen sheets of paper floating forever in the wind.” This work is counterbalanced by a second large multichannel video installation by Ritu Sarin and Tenzing Sonam. Middle Way or Independence? (2008) which unfolds around a comprehensive and multifaceted discussion on the Tibetan question, setting the “Middle Way” approach of partial autonomy within China against the demands for total independence by the activist community. The film fragments interweave scenes from recent Free Tibet activities with interviews with members of the Tibetan community in exile in India, and Chinese intellectuals engaged with the Tibetan question who confront their own spiritual and political engagements.

Qiu Zhijie has been traveling to Tibet over the past few years in an ongoing art project that can be understood as a journey, a pilgrimage of ideas, a collection of factual evidences. In Lhasa Is Far Away, America Is Far Away (2007) and A Railway from Lhasa to Katmandu (2006–07), the artist retraces the steps of the first historic Tibet explorer of the 19th century, of the pundit Nain Singh. Furthermore, he references the Qinghai-Tibet Railway, which opened on July 1st 2006, and now connects Lhasa to the Chinese railway system, a symbolic and infrastructural exploit with lasting impact.

Many of the presented works are ongoing in nature, evolving over time through reediting or the addition of further research, thus remaining by default always incomplete. Marine Hugonnier’s book contains a constantly growing collection of loose pages recording thoughts derived from Buddhist concepts and compiled by the artist or drawn from interviews that consider issues encapsulated by the title of the work itself: An Artwork which is not an Artwork (2008).

A Question of Evidence explores the contradictions embedded in the notion of the document, revealing its susceptibility to secrecy or deliberate acts of self-censorship. This is metaphorically shown by Pak Sheung Chuen, whose “miracle printed cash receipts” reveal hidden, encrypted messages behind the formal transaction of an exchange of goods. Similarly, Heman Chong’s series of collages Deleted Scenes (2008) resemble serial portraits whose subjects, having been removed, seem to have been permanently deleted from society. Khin Khin Su, in contrast, looks at the human condition under different sociopolitical realities in Burma through confrontational performances, large banners, and installations that indirectly question the role of the artist in Burmese society.

The exhibition will also prominently feature selections from different archives and collections, including the Tibetan Amnye Machen Institute (AMI) in Dharamsala, India. Since 1992 the AMI has undertaken a systematic scientific examination of Tibetan history, culture, society, and politics, studying the past to help Tibetans understand their present. It is a publishing house for independent Tibetan creative practitioners and thinkers providing forums for discussion and promotion of their work, together with research facilities, expertise, funding, and national and international recognition. A second archive is on temporary display within Cybermohala Hub (2008) a cyber-real structure designed by architects Nikolaus Hirsch and Michel Müller in collaboration with the Cybermohalla Ensemble , initiated by a community of Indian practitioners aged fifteen to twenty-three who have been gathering in media labs in a poor area of New Delhi. Mohalla , which in Hindi means “neighborhood,” are places for sharing thoughts, ideas, and creative energies in the form of blogs, photographs, videos, animations, sound recordings, texts, magazines, and so forth. The Cybermohalla Hub , which during the exhibition will be newly erected in the Ghevra area at the city borders, is dedicated to collecting this vast database, but it is also a space giving form to such productive forces. Visual documentation evidencing the destruction, relocation, and rebuilding of the media space in the context of the new urbanism of New Delhi will be made accessible in the structure.

The concept of the document, as the artist Allan Sekula suggests in his writings on the photographic archive, entails a notion of legal or official truth as well as an idea of proximity to and verification of an original event. The proliferation of scattered archives in the exhibition does not, however, function as evidence of events claiming to be based on a true narrative, on documents constituting ultimate means of proof. What gives an archive, blog, or book an authority that validates the facts recorded and deposited within them? Inscriptions serve as supplements to memory, and yet they cannot provide testimony because they are unable to attest to anything but their own survival, distanced from that which has happened, offering material for phantasmagorical fictions or mythical tales: in other words, they sometimes are simply effects of the real underpinning orders of knowledge. This idea is exemplified by Raqs Media Collective’s Unfamiliar Tales (2008), a piece confronting the nature and power of inscriptions beyond local definitions.This photographic and text work elaborates on and reinvents the lightly humorous and moral subtext of the Jataka fables incorporated by both Burmese and Tibetan Buddhism to illustrate the philosophical significance of the Buddha's incarnations into a state of 'not-self'-ness - a manner of sentience that locates its origin and existence within a web of dependence and reciprocity that encompasses the ever-changing nature of the material universe. To Raqs, "it is the willful, or involuntary setting aside of the recognition of this web of dependence and reciprocity that lies at the root of all tyranny."

What is striking about this fervent activity is how it intersects critique, rigor, and play with shifts in the modalities of real and fabricated evidence, opening up avenues of inquiry, as the scholar Ravi Vasudevan has noted, rather than making claims of definitive truths or clear-cut paradigms.