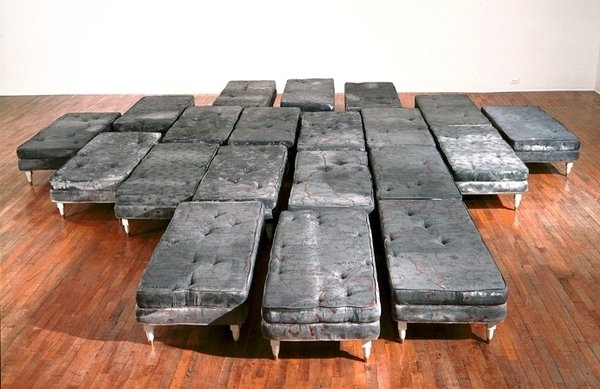 Miami Art Museum premieres the most comprehensive survey of the work of Argentine artist Guillermo Kuitca ever presented in North America. On view at MAM from October 9, 2009 through January 17, 2010, Guillermo Kuitca: Everything, Paintings and Works on Paper, 1980-2008 traces the evolution of Kuitca’s work through more than 50 canvases and 25 works on paper, spanning 28 years of the artist’s career.

In addition to the artworks within Miami Art Museum’s on-site gallery space, the Museum will also host Guillermo Kuitca: Everything (else), at Miami’s Freedom Tower. MAM is working with the Art Gallery System of Miami Dade College, which owns and operates this nationally designated landmark historic building, to install 32 Seating Plans, 2007 a piece comprised of 32 drawings and two large-scale paintings, Everything, 2004 and The Ring, 2002, each over 20 feet wide. Also on view for the first time will be “Der Fliegende Holländer" (Scrim Suite), 2009. Tracing its origins to the stage designs conceived by Kuitca for a 2003 production of Wagner’s The Flying Dutchman at the Teatro Colón in Buenos Aires, this installation explores the experience and perception of light, space and image through the medium of three silk scrims.

Guillermo Kuitca explores themes of dislocation and the intersection of public and private spaces through works ranging from early paintings of theatrical scenes, to complex abstractions which reference maps and architectural plans. Kuitca was the chosen representative of Argentina at the Venice Biennale in 2007, where he was one of only three artists with work on view in both a national pavilion and in the central international Biennale exhibition. The artist’s work was previously exhibited at the Center for Fine Arts, which later became the Miami Art Museum, in the 1995 exhibition Burning Beds Guillermo Kuitca: A Survey 1982-1994.

Additional support for the presentation of this exhibition at Miami Art Museum is provided by Jorge M. Pérez and Bank Hapoalim.

Guillermo Kuitca: Everything (else), Large Scale Works at Freedom Tower is presented in association with Miami Dade College.