Guard Your Honor While You Are Young 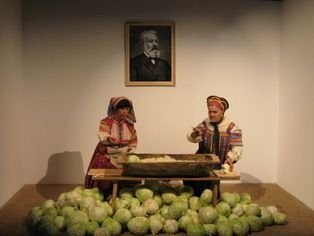 Three women in Russian costumes reading Pushkin, photos of sites of former artistic joy, a fretsaw ship's crew of former performance figures – these form the three "columns" of a new exhibition by Yuri Leiderman, one of the best known representatives of the contemporary Moscow art scene. The exhibition "Guard Your Honor While You Are Young" (Die Ehre hüt von Jugend auf), from November 27 th 2009 to February 12th 2010, is a continuation of the cooperation between the Museum Folkwang and the RWE AG in the field of contemporary art. The focus of 2009 is on Russia.

The title of the exhibition draws on the foreword from Pushkin's "The Captain's Daughter", a key novel of this major Russian writer and one of the best-known works of 19th century Russian literature. The sentimental subject of the story unfolds against the backdrop of the Pugatshov Uprising, a bloody popular rebellion in the 18th century. Two officers, the one honest and the other a scoundrel, compete for the hand of a pretty daughter of a commander.

Leiderman has three women in Russian costumes read the text: in Russian and in regular intervals over a period of four months.

Like in many of his works, the artist is trying to undermine the categories and relations between form and content. In this work, the author is less interested in the text and more in the image and the ornamentation and meaning arising in the concrete and abstract motifs of stereotypes. Placing motifs and cultural identities in another context characterizes an entire series of performances encapsulated in the title "Geopolitics". Here, Leiderman has as theme ideas of nationality (their artistic, ideological and "hallucinatory" constructions), as well as questions of cultural stereotype and cultural inheritance.

Thus – as a documentary video shows – viewers in Leiderman's exhibitions meet Mongols in front of hallucinogenic mushrooms, an Indian playing a sitar, whisky drinking black musicians, Ukrainians sitting on shelves or the artist in person and in an Admiral's uniform in front of a mysterious box: images that play with the functions of symbols, narration and illustration while at the same time rejecting them.

In his photo-work "Places where I was happy", a curve made of red points marks the artist's respective moods. The photo installation surrounds the exhibition room and raises claims to the "subjective", whose value Leiderman repeatedly emphasizes in his work and his texts.

In Leiderman's work, literature and art enter into a close relationship. The problem of approaching, without knowing Russian, only peripherally the coded levels of meaning is part of the artistic work. This applies as well to the reading performance in Essen.

Yuri Leiderman, artist and writer, was born in Odessa (Ucraine) in 1963. Participated in apartment exhibitions in Moscow and Odessa since 1982. Graduated from Mendeleev Institute of Chemical Technology (MCTI) in Moscow 1987. He is one of the founding members of "Medical Hermeneutics" group (together with Sergei Anufriev and Pavel Pepperstein) in 1987 which he has left in 1990. Participated in numerous international exhibitions of contemporary art, including biennales in Venice (1993, 2002), Istanbul (1992), Shanghai (2004), Manifesta (Rotterdam, 1996) etc.. Participated in different artistic initiatives, like the curatorial project "Hotelit" (together with Vadim Fishkin, 1998 – 2001), "Kölnische Gesamtausflüge" (together with Yuri Albert, Sabine Hänsgen and Vadim Zakharov, 2005 – 2006), "Capiton- (now "Corbusier") group" (together with Andrei Monastyrski and Vadim Zakharov, from 2007 – now), and the film series "Geopoetics" (together with Andrei Silvestrov). Author of several books including essays, prosa and poetry.

An accompanying brochure is being published for the exhibition with a text by Yuri Leiderman
(16 pages, Ger/Eng).

The exhibition accompanies a program of events with talks and events for children and teenagers.