The 60s in Brazil. The Tropicalia movement developed around the highly conceptual art of Lygia Clark and Helio Oiticica and incorporated music (Caetano Veloso, Gilberto Gil), film (Glauber Rocha), and poetry (Augusto + Haroldo de Campos). Though the movement did not explicitly fall into line with the orthodox Left, its energy and vitality, the pleasure in shrill spectacles, and the increasing emphasis on participatory art were mainly directed against the oppressive years of Brazil's military regime. The exhibition presents a historical cross-section of the variety of works brought forth in that short summer of anarchy in the arts and reveals the creative impulse prompted by Tropicalia in the production of contemporary Brazilian artists such as Rivane Neuenschwander or Ernesto Neto. 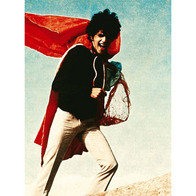 What is new today may be dead tomorrow. Down with prejudice. Art and culture are a totality. A new aesthetics. A new morality. Communicate by polemics. We have left the Stone Age behind. We have entered the Age of Throwing Stones.
From the article “Marginalia” in the magazine “O Cruzeiro,” 1968

The present moment, the now, is the only tangible reality that still communicates something today.
Lygia Clark

Tropicália was born from the spirit of the Manifesto Antropófago (Cannibal Manifesto) written by the modernist poet Oswald de Andrade in the 1920s: it dealt with the devouring of foreign cultures, the critical appropriation of art, music and fashion trends from the “First” World, and a concept of hybridity which forged a specific aesthetical meta Brazilianism from particles and fragments of cultural artifacts. “Cannibalism is the only thing that joins us. Socially. Economically. Philosophically,” wrote de Andrade. Tropicália was a new critical language (of art) which intervened on the level of everyday communication and used the possibilities of modern mass communication. Television allowed singers like Caetano Veloso and Gilberto Gil, who considered themselves part of the movement, to become mouthpieces of an artistic attitude rejecting the “import of a prepacked and ready for use consciousness” (de Andrade).

“The myth of Tropicalism is much more than just parrots and banana trees,” says Hélio Oiticica, the epoch’s leading Brazilian artist, in one of his numerous programmatic texts. For the people living in precarious situations, the energy and vitality, the pleasure in shrill spectacle, and the opening of the field of cultural activity were – without being explicitly political – mainly directed against the oppressive years of the Brazilian military regime which had made an end to comparatively democratic conditions with a coup in 1964. The cultural activists countered the dictatorship’s monotony and monochromy with the country’s rich cultural diversity, which was reassessed aesthetically in a manifold, often ambiguous manner. The aim was to fight “the silly dream and myth of a second hand technocracy” with creativity, as the important theater director José Celso Martinez de Corrêa put it.

This anything but pleased the orthodox Left, which saw its wooden world view threatened and rejected Tropicalism as a reactionary, regressive form of art: the artists, musicians, filmmakers, theater people, and poets who identified with the idea, however, did not offer simple ideological solutions, but rather strove to undermine the official version of Brazilian culture, which maintained a unity in diversity that had never existed that way. Haroldo de Campos, a key figure of concrete poetry in Brazil, alleged that Tropicalism was about a “dialogical and dialectical connection with the universal.”

Operating across boundaries of genre and style, Tropicalism relied on allegorical impulses, contradictions, and paradoxical juxtapositions that defied a one dimensional understanding. “I was never interested in drawing after nature,” said Antonio Dias, who also numbered among those who were crucial in making Tropicália what it was, “I was always concerned with the inner being, the psyche, with man’s political nature.” It was above all Hélio Oiticica who proved an important conceptualist and practitioner of an aesthetics directed toward overcoming the separation of art and life. After the formal rigorism of concrete and neo concrete art prevailing in Brazil in the 1950s, the Tropicalistas established an “anti art” which was not focused on representation and the object but on creating situations and contexts for collective behavioral experiments.

Art was to be an experimental exercise toward freedom and to transform the individual’s perception through sensory practices. “The avant garde phenomenon in Brazil is no longer the affair of an isolated elite, but a wide cultural subject with social effects aimed at collective solutions. “ (Hélio Oiticica) With key works such as Hélio Oiticica’s Tropicália or Glauber Rocha’s film Terra em Transe as well as important workgroups by Nelson Leirner, Rubens Gerchman, Antonio Dias, Anna Maria Maiolino, and Lygia Pape, the exhibition presents a historical cross section of the variety brought forth in that short summer of anarchy in the arts. The show also documents how the creative impulse of Tropicália has continued to exercise its impact on the work of (exiled) Brazilian artists like Ernesto Neto, Rivane Neuenschwander, or Cao Guimarães until today.