With her monumental installation Il Grande Ritratto, Tatiana Trouve' converts the lower level of the Kunsthaus into a truly subjective realm: an inner post-apocalyptic landscape with spatial autonomy and strength, inspired by a science-fiction novel, Il Grande Ritratto (1960) by Dino Buzzati, an uncanny story of science and love, fiction and reality, an assemblage of desire, space and utopia. The group exhibition "Catch Me!" is about the phenomenon of acceleration, the personal experience of speed relative to time and space. With: Peter Fischli and David Weiss, Carsten Holler, Aleksandra Mir, Ed Ruscha, Anri Sala, Roman Signer, Xavier Veilhan among others. 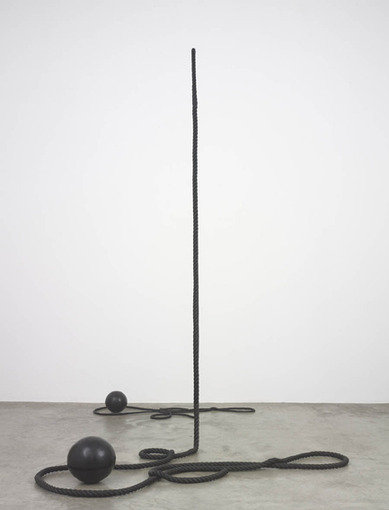 Kunsthaus Graz is pleased to announce a very first in Austria, the solo exhibition Il Grande Ritratto by one of the leading artists of the younger generation, Tatiana Trouvé (born 1968 in Cosenza, Italy, now living and working in Paris).

Awarded the prestigious Prix Ricard (2001) and Prix Marcel Duchamp (2007), Trouvé has participated in numerous exhibitions all over the world, including the Venice Biennale (2005), Centre Georges Pompidou, Paris (2008), Manifesta7 (2008), and most recently, migros museum für gegenwartskunst, Zürich (2009). Her work (mainly large scale installations, sculptures and drawings) defines what the artist herself articulates as "ways of world-making and ways of being in the world."

Tatiana Trouvé with her monumental installation Il Grande Ritratto, conceived especially for the Kunsthaus Graz, will convert the lower level of the Kunsthaus (Space02) into a truly subjective realm: an inner post-apocalyptic landscape with spatial autonomy and strength, inspired by a science-fiction novel, Il Grande Ritratto (1960) by the Italian master of literary neo-avant-garde, Dino Buzzati, an uncanny story of science and love, fiction and reality, secrecy and dreams, an assemblage of desire, space and utopia. Buzzati’s oeuvre which oscillates between magic realism and social alienation sets up a context for Trouvé’s radical elaborations of space and time that in effect turn the viewers’ journey through space into less a physical than rather a psychological experience. Her Il Grande Ritratto concentrates on creating a space of blurred boundaries between the inside and the outside: by an almost delirious act of spatial reconfiguration, the artist deconstructs the space, saturating, condensing and "decelerating" it.
The installation carries performative and participatory qualities: while walking through the space, the viewer morphs into the landscape which disrupts the autonomy of the museum’s space and imposes its own spatial and temporal grammar with small gardens of rocks and plants, a proliferation of columns that generate a different spatial rhythm, cables running through the air, surreal working spaces and bizarre automatic elevators... Trouvé’s is a sort of anti-space: an alternative environment where all regular spatial and temporal coordinates are either negated or suspended: the sculptures act as the prothesis of the building and some objects are set in a state of levitation, partly stopped in their movements or challenged by the artist’s own treatment of scale and perspective. Il Grande Ritratto is, however, far from a portrait of chaos: on the contrary, it is an "image" of precision and formal unity that aims at generating a new and refreshing sense of space’s perception and comprehension.

The exhibition is accompanied by a series of events, including a meeting with the artist, a lecture by Werner Helmich on Dino Buzzati’s literary work within the context of science-fiction literature of the 1960s, lectures by Pamela M. Lee and Louise Neri on the work of Tatiana Trouvé, as well as three cinematic marathons (Into the Night) that will introduce a cinematic reference to Trouvé’s exhibition.
Into the Night will include screenings of Andrey Tarkovsky’s major works (The Mirror, Stalker, Nostalgia) with an exclusive introduction by Tarkovsky’s son, Andrey Tarkovsky; two major works by Hungarian director, Béla Tarr (Damnation, Werckmeister Harmonies), introduced by the author himself in a conversation, as well as the screening of Jean Cocteau’s Orphic Trilogy (The Blood of a Poet, Orpheus, Testament of Orpheus).

The catalogue of Tatiana Trouvé’s exhibition will consist of rich visual material that enlarges the context of Trouvé’s exhibition in the Kunsthaus and it will be accompanied by a sequence of critical texts by the artist herself, Louise Neri, Maria Gough, Francesca Pietropaolo, Dieter Roelstraete, Pamela M. Lee as well as a curatorial text by Adam Budak and introduction by Peter Pakesch. The catalogue (€ 29,90) is available in German and English at the Kunsthaus Graz Shop.

Tatiana Trouve' (born 1968 in Cosenza, Italy, living and working in Paris) was awarded the prestigious Prix Ricard (2001) and Prix Marcel Duchamp (2007), and has participated in numerous exhibitions all over the world, including the Venice Biennale (2005), Centre Georges Pompidou, Paris (2008), Manifesta7 (2008), and most recently, Migros Museum für Gegenwartskunst, Zürich (2009).

Contrasting with Tatiana Trouvé’s solo exhibition Il Grande Ritratto in Space02 that will show a space in a condition of arrested time, the group exhibition Catch Me! is about the phenomenon of speed as a personal experience in relation to a socially constructed image and as a quest to grasp life in full bloom.

Speed as an experimental phenomenon has been in the minds of many theoreticians and artists during the 20th century and is generally either negatively exaggerated or romantically idealized as perhaps in Jack Kerouac´s On the Road, or in Paul Virilio’s benchmark essay Polar Inertia. Speed has been the metaphor for everything new and hot, for development as a general driving force of life itself, as well as for intense situations of energy, creativity and spirit. The works selected for Catch Me! are about this fascination with acute situations, the thrill of an accelerating dynamic and the exhilaration that speed can generate, as well as about captivating the force of movement in time. That every form of speed is invariably followed by slowing down is something that we usually try to forget when we are in the exhilarated stage of acceleration, but if nothing else this is what the recession has undoubtedly shown us by confronting us with stark images of the stock market index.

So Catch Me! will deal with the longing, the waiting, even the lust for speed that can be seen as a desire to be master of a concentrated moment. Speed and acceleration carry with them a usually very male image of power that borders on the carnal and erotic. Thereby promising an exciting, sometimes even clear-sighted experience as spelt out so vigorously by the Futurists one hundred years ago when Marinetti proclaimed that passivity was over, "aggressive action" was to come and "that the world’s magnificence had been enriched by the new beauty of speed." In 1909 when Marinetti wrote his famous sentence and damned everything old with it, cars were just about getting faster than the fastest animal, the first planes had left the earth, but no man or woman had yet been to the moon and actually seen the slowed down circular movement of the small blue ball in a huge, never ending, continuously moving space. And no one had dreamt of actually diving into the depths of a proton and finding there a whole new – continuously moving - universe of existence.

Accordingly the desire to grasp speed is also to be understood as a desire to comprehend the phenomenon as a metaphor for life itself in its form and composition and to scrutinizingly take it apart, maybe by anachronistically slowing it down, by splitting it up or by extracting forcefully an essence.

Starting with High-Speed Gardening by Ed Ruscha, the exhibition represents an attempt to set up a choreographed display, with a group of artists making speed in its various facets the libretto in the design of Space01.

A catalogue accompanies the exhibition.