The People United Will Never Be Defeated

A topical exhibition around the municipal elections of 3 March 2010, in which the relationships between art and politics are critically examined. Artists have long been aware of the social implications of their work. Politicians also frequently talk about the role of art in society. A certain form of social engagement can after all be found in almost every work of art. The focus is on artists who emphatically, and explicitly, raise the issue of the political system: the voting, the speechmaking, the campaigns, the meetings, the decisions. 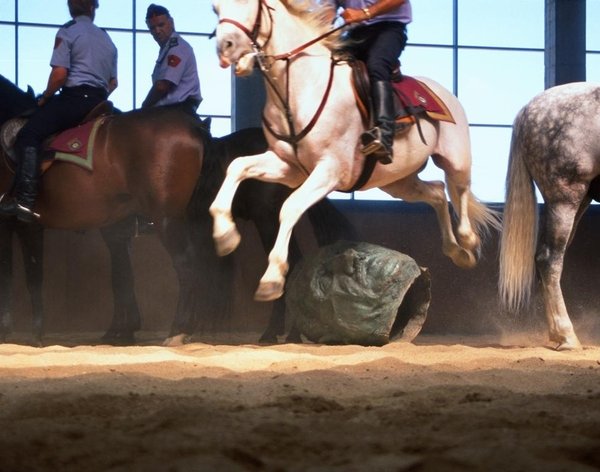 From 19 February to 18 April, TENT. presents the group exhibition The People United Will Never Be Defeated. A topical exhibition around the municipal elections of 3 March 2010, in which the relationships between art and politics are critically examined. Artists have long been aware of the social implications of their work. Politicians also frequently talk about the role of art in society. A certain form of social engagement can after all be found in almost every work of art. In The People United Will Never Be Defeated it is, however, not about art demonstrating its engagement. The focus is on artists who emphatically, and explicitly, raise the issue of the political system: the voting, the speechmaking, the campaigns, the meetings, the decisions. By getting close to the politician they enter into dialogue with the established order.

New and existing works; videos, drawings, installations
In the space-filling installation ‘Politiek Kunstbezit’ (Political Art Collection), Jonas Staal (1981) brings together works from the parliamentary chambers of the political parties in Rotterdam. Thus, the public can consider the meaning of art & culture from a political context. Filmmaker Rob Schröder (1950) interviewed the political parties about their art collections. This documentary is incorporated into the installation by Staal. Sjoerd Oudman (1982) composed a campaign song for all the political parties. Iratxe Jaio (1976) and Klaas van Gorkum (1975) swapped six campaign billboards in the centre of Rotterdam for their own new billboards. This intervention and the reactions of the public during the election period were recorded on video and will be shown in the exhibition. From an information stand, BAVO, consisting of Gideon Boie (1975) and Matthias Pauwels (1975), offer advice on the artists’ position in society and how to improve it. Jack Segbars (1963) made a video report of his trip to Israel / Palestine.

In a video installation he shows that the impressions he gained were often conspicuously different than the images and information that we are familiar with. Marc Bijl (1970) made a mural especially for and in TENT., in which a political statement has the central role. In the video work Lobbyists Libia Castro (1969) & Ólafur Ólafsson (1973) portray lobbyists during their work at the European Parliament. The video uses different genres and is both a documentary and a music video. Fernando Sánchez Castillo (1970) makes a new work, which focuses on important figures in European political history. Political cartoonist Joep Bertrams (1946) is invited to present a selection of his drawings made for the Het Parool newspaper. Several years ago, Tellervo Kalleinen (1975) and Oliver Kochta (1971) started their project Complaints Choir, in which they appeal to the inhabitants of a city to gather together their complaints and to sing them in this choir.

TENT. shows an installation of the project and the Rotterdam Complaints Choir will sing in the exhibition space on 3 March. The video work by Domenique Himmelsbach de Vries (1983) (previously selected for the TENT. Academy Awards) gives a penetrating account of how reason alternates with emotion in the voting for the Netherlands’ most controversial politician Geert Wilders. The title of the exhibition refers to a Chilean protest song from the nineteen seventies: “El Pueblo Unido jamas sera Vincendo” by Sergio Ortego. This was a period in which many Chilean artists fled to Europe and Rotterdam. And in the years that followed they expressed their political protests on the walls in the heart of the port city.

Post-Propaganda
The motivation for the exhibition is the essay Post-Propaganda (published by Fonds BKVB) by Jonas Staal, with which he aims to further the discussion on art and politics. Staal concludes that contemporary art has precisely a political role to fulfil: art and politics cannot do without each other. On Staal’s invitation, Klaas van Gorkum and Iratxe Jaio, BAVO and Sjoerd Oudman have all produced new works in the public domain in Rotterdam.

Side programme
A special events programme has been compiled to accompany the exhibition:

19 February 2010 20.00h: opening.
Pianist Bobby Mitchell plays the piece The People United Will Never Be Defeated! (1976) by composer Frederic Rzewski. Earlier in the evening, Witte de With, Center for Contemporary Art open the exhibitions 'ACT IV: I Could Live in Africa', 'ACT V: Power Alone' and Isa Genzken’s intervention on the building.

3 March 2010 16.45h: The Complaints Choir sings the grievances of Rotterdammers.
This edition of the project by artists Tellervo Kalleinen and Oliver Kochta-Kalleinen was initiated by SENSATIONAL MIX and is produced in collaboration with Kosmopolis Rotterdam and the Centrum Beeldende Kunst Rotterdam.

25 March 2010 20.00h: Protest! Activism in art – debate in collaboration with Armininius.
TENT. organizes the debate: Protest! Activism in Art - with Jonas Staal, Joep Bertrams and Marc Bijl among others. Since Pim Fortuyn, Rotterdam is often seen as a city in which new social developments first become visible. A striking number of Rotterdam artists appear to be inspired by activism. Do artists hope to achieve something with this art?

Background information TENT. Rotterdam
Since 1999 TENT. has been drawing attention to and presenting significant developments and image-defining artists in the visual arts in Rotterdam. The 1000 m2 space is located in a characteristic former school building in the cultural Witte de Withstraat. In dynamic solo and group exhibitions, TENT. presents the many-sided manifestations of contemporary art in Rotterdam.