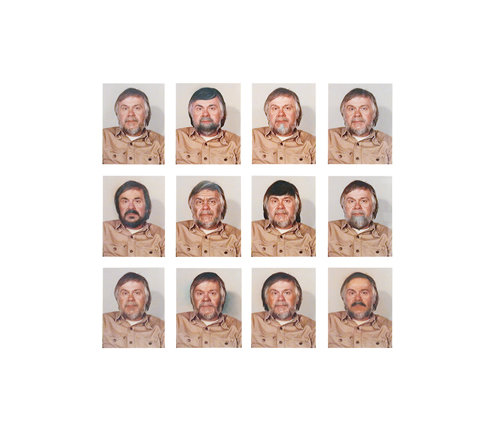 Born in National City, California, in 1931, John Baldessari is undoubtedly one of the most influential artists of our time. He has challenged the conventions of artistic practices by employing language and imagery in unexpected ways.

The exhibition begins with Baldessari’s early works made during the 1960s, when he was working as a painter, primarily using oil on canvas. These paintings represent some of those that survived the artist’s infamous Cremation Project. On 24 July 1970, Baldessari incinerated all the work made prior to 1966 that was in his possession, leaving behind the ashes in a book-shaped urn as a testimony to the event. This drastic act was a result of the artist’s doubts concerning the dominant art form of the time and symbolised his artistic rebirth. The composition and content of these early paintings were never traditional, already embodying Baldessari’s sense of humour and wit. Fascinated by the idea that art could be taught, Art Lesson (1964) and Art Lesson #3 (1967) mock the preaching of art instruction manuals. God Nose (1965), a Pop-style painting of the sky with a cloud and floating nose, plays with the title of the work and its imagery. This fascination with language is a theme that continues throughout the artist’s work until the present.

Working in the cultural isolation of National City and not in Los Angeles, California’s art nucleus, allowed Baldessari a certain freedom to experiment and do what he wanted without being scrutinised by an audience. In 1966 he began taking photos in a working class suburb of his hometown, National City. The pictures were intentionally non-spectacular and mundane, often taken from the car without looking through the viewfinder. As an antithesis to Pop art, Baldessari adopted an anti-heroic attitude by documenting ingenious actions instead of monumentalising his subjects. The photos were enlarged and transferred onto canvas, and then commercial sign painters painted equally prosaic texts identifying each site. These photo and text pieces created new meanings and tensions between images and words and marked a pivotal turning point in Baldessari’s artistic trajectory.

Baldessari later went one step further in his inquiry of prevailing art-world aesthetics by dropping imagery all together from his canvases, leaving only texts appropriated from varied sources, which he sometimes manipulated. Clement Greenberg (1966–68) displays text from the critic claiming that art is about aesthetic impact, not ideas; while Everything is Purged… (1966–68) insinuates the contrary. A Painting that is its Own Documentation (1966–68) is a growing work that chronicles the exhibition details of each venue, adding new panels as and when necessary.

"I sought to use language not as a visual element but something to read. That is, a notebook entry about painting could replace the painting... I was attempting to make something that didn’t emanate art signals. The only art signal I wanted was the canvas... [it was] important that I was the strategist. Someone else built and primed the canvases and took them to the sign painter, the texts are quotations from art books, and the sign painter was instructed not to attempt to make attractive, artful lettering but to letter the information in the most simple way."

The concept of authorship was further addressed in the Commissioned Paintings (1969) series in which Baldessari hired amateur artists to produce paintings of photographs of a hand pointing at something ordinary. The inspiration for the series came from a criticism that said that Conceptual art was nothing more than pointing.

Teaching has always been a significant and integral part of Baldessari’s life. In 1970 he was offered a position at the renowned California Institute of the Arts (Cal Arts) where he taught alongside influential contemporaries such as John Cage and Nam June Paik. Being exposed to their work and their respective mediums, music and video, made a significant impression on Baldessari. Music brought about the notion of temporality, which is reflected in his work through the use of multiple photos in a time sequence manner. Artist Hitting Various Objects with Golf Club (1972–73) chronicles the artist doing just that in 30 frames. Similarly, in other works the artist photographed his attempts to exhale cigar smoke in imitation of a small cloud or waving at boats passing by.

With the recent introduction of the Sony Portapak and its availability at Cal Arts, Baldessari’s naturally experimented with the new medium. Initially made for his students, such videos as I Will Not Make Any More Boring Art (1971), where the artist writes this sentence repeatedly in a notebook as if it were a punishment, and I Am Making Art (1971), in which Baldessari moves different parts of his body slightly while reciting this sentence, have become some of the artist’s most iconic video pieces.

Having moved to Los Angeles, the proximity of Hollywood also found its way into Baldessari’s work. He adopted the work processes of the film-making industry as themes in works such as Story with 24 Versions (1974) and Scenario: Story Board (1972–73) where plots are sketched out scene by scene.

Baldessari also appropriated imagery from film stills, which he found in local shops and meticulously categorised by content for inspiration and use in his works. Simultaneously, the pieces he created began to take on a larger scale, using the photographs as building blocks to suggest narratives. In Kiss/Panic (1984) there is a provocative juxtaposition of a couple kissing, with a seemingly chaotic crowd scene below, surrounded by photos of pointing guns.

By the mid-1980s coloured dots began appearing on the faces of the characters in the found photographs. Baldessari discovered that obliterating the face gave even more anonymity to the subjects and therefore forced the viewer to focus on other aspects of the image to make sense of the scene. Although text is absent from the works themselves, language continued to play an important role in the form of suggestive titles, which for Baldessari are as significant as the piece itself.

Bloody Sundae (1987) consists of two distinct scenes with the subjects composed in the form of an ice-cream dessert. On top, two men attack a third beside a stack of paintings, while beneath them a couple lounge decadently on a bed. All five faces are covered with coloured circles. The violence of the upper image coupled with the suggestive title, hints at a pending raid on the couple’s room.

In the Goya Series (1997) Baldessari returned to the aesthetics of the National City series with simple parings of photos of ordinary objects and text. The curt sarcasm of the titles is inspired by a series of etchings by Francisco de Goya.

Text also reassumes its role as the co-protagonist in the Prima Facie (2005–06) series. Portraits are juxtaposed with a range of adjectives that describe possible emotions or characteristics associated with the person’s facial expression – the idea being that you don’t know what anybody is thinking just from the expression on their face.

Baldessari revisits his ongoing interests in the parts of the body that identify visual sensitivity in the series Noses and Ears (2006–7) and Arms and Legs (2007–8), in which these parts are isolated while other details of the body and environment are coloured in or omitted, leaving viewers the bare minimum to interpret the work.

In his most recent series Furrowed Eyebrows and Raised Foreheads (2009), Baldessari continues his exploration of human expression through fragmentations. The works combine film stills of faces and bodies that are covered over by layers of paint or collage, or altered by the superimposition of paint over the foreheads and eyebrows.

The sculpture from the new work Brain/Cloud (Two Views): with Palm Tree and Seascapes (2009) is reminiscent of the clouds in his first paintings: Falling Cloud (1965) and God Nose.

Baldessari’s long-term exploration of language and image coupled with his inquisitive approach to art-making has expanded the parameters of what we consider art. His dedication as an educator has had – and still continues to have – a profound impact on generations of artists such as Rita McBride, Meg Cranston, Jack Goldstein, Allan McCollum, Matt Mullican, Richard Prince and Christopher Williams, among others.