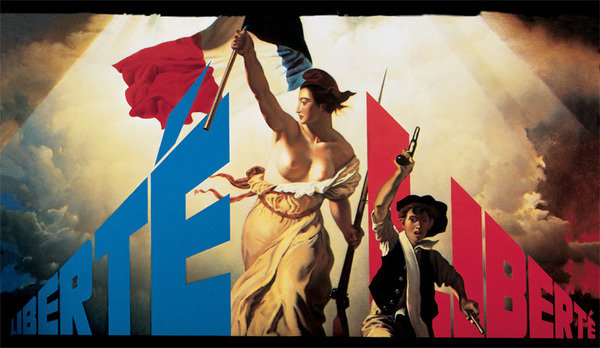 Curated by Marie-Laure Bernadac, curator in charge, special advisor on contemporary art at the Louvre, assisted by Pauline Guelaud.

In the wake of the exhibition “Holy Russia, Russian Art from the Beginnings to Peter the Great”, the Musée du Louvre wished to draw a portrait of contemporary Russian creation by exhibiting the works of around fifteen artists from a variety of generations and movements.

The museum — which does not have a Slavic art department — chose the medieval Louvre for its display, since these archeological vestiges convey architectural utopias that are echoed in the works of artists such as Ilya and Emilia Kabakov, Igor Makarevitch and Elena Elagina or Pavel Pepperstein. This subterranean space also fuels fiction and the imagination, as shown in the works of Alexeï Kallima, Valery Koshlyakov and Vadim Zakharov, as well as Yuri Leiderman, who will create a performance for his Geopoetics series, and Yuri Albert, who will invite visitors to tour his collections blindfolded.

Another space invested by the Counterpoint, the Tuileries Garden will receive the Pavillon Rotonda II by Alexander Brodsky, a famous architect, but also a sculptor. Painting, sculptures, drawings, photographs, videos and performance art all make reference to Russian artistic tradition, from the icon to the museum, not to mention a critical rereading of the avant-garde. At the entrance, Liberté by Erik Bulatov sets the tone, engaging discourse between realist propagandist esthetic and homage to Delacroix.

Artists incessantly cite suprematism and constructivism, the iconic paintings of Malevich and Tatlin’s Tower, symbol of revolutionary utopia like the Tower of Babel. Others like Komar and Melamid, Avdei Ter-Oganyan and Blue Noses are devoted to an ironic vision of art history. Conversely, videos by Olga Chernysheva and Dmitry Gutov, drawing inspiration from the Tretyakov Gallery and the Russian Museum, offer a more poetic vision of the museum.

This event is part of France's "Year of Russia" celebrations and is supported by its patronage committee.
Exhibition organized by the Musée du Louvre with the National Center For Contemporary Art in Moscow (NCCA) and the Stella Art Foundation.

With the support of Louis Vuitton.
In partnership with Métro, France culture and Paris première.

Medieval Louvre and Tuileries garden
Opening hours: Every day except Tuesday, from 9 a.m. to 6 p.m., Wednesdays and Fridays until 10 p.m.
Admission: Admission with the purchase of a ticket to the permanent collection: €9.50; €6 after 6 p.m. on Wednesdays and Fridays.
Free admission for youths under 18, EU residents under 26, teachers with an Education Pass, job seekers, Louvre Jeunes cardholders and members of the Amis du Louvre, and all visitors the first Sunday of each month.