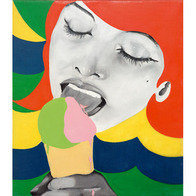 “We choose to LOOK at LIFE all the TIME, and though we realize that they are in one sense adult comic books, they are also full of things that speak...“ For Sister Corita, the world of signs, advertising slogans, and the culture of logos was not just some vast wasteland, but a sphere that supplied her with input for an art nourished by everyday life. Her work, like that of Evelyne Axell, Christa Dichgans, Rosalyn Drechsler, Jann Haworth, Dorothy Iannone, Kiki Kogelnik, Marisol, and Niki de Saint Phalle, stands for feminine strategies of artistic self-empowerment during the Pop Art era, particularly in the 1960s. While from an art-historical point of view Pop Art is mainly associated with male protagonists, POWER UP – Female Pop Art intends to undertake a revision of this understanding through the presentation of outstanding women artists’ positions. Oscillating between abstraction and figuration, commodity cult and critique of capitalism, high and low art, the women artists’ works on display in many aspects resemble those by their male colleagues in terms of material, subject matter, style, and working method. Documenting and hypostatizing the prosperity of the postwar era and reflecting upon the superficiality of consumerism, the artists unmask the commodity myth as an empty civilizational achievement like Christa Dichgans or affirm certain items by turning them into oversized kitsch objects like Jann Haworth with her Soft Sculptures. Through the graphic character of their simple language of forms, their use of new materials like plastic, and their choice of garish colors, women pop artists, as feminist pioneers attracting maximum attention with their self-presentations like Evelyne Axell, Niki de Saint Phalle, and Kiki Kogelnik, satisfied the taste of the mass and yet remained militant, critical, and exceptional. The exhibition does not postulate some genuinely feminine art, but strives to focus on a number of outstanding women artists’ oeuvres in the field of Pop Art and to shed light on their identity-creating practice and their view of women’s role in society which was very much determined by patriarchal notions in the 1960s.

These artists’ approaches have revised the male regime of viewing and such representations of women as Tom Wesselmann’s deindividualized matrices of the female body, Mel Ramos’s picturesque fusion of advertisements with lasciviously rendered nudes featuring as objects of desire, and Allen Jones’s sadomasochistically arranged female sexual companions. Instead, they describe the corset in which women’s self-representation and representation by others seemed to be caught in those years like Jann Haworth, Kiki Kogelnik, and Marisol, highlight the attempt to shake off the fetters of domestic life and become visible in public by means of art like Christa Dichgans, and provocatively expose the female body, love, and sexuality like Evelyne Axell and Dorothy Iannone. Painting over newspapers in an iconoclastic gesture, Rosalyn Drexler explores the creation of clichés and gender typifications in Hollywood films as well as the construction of superstars. Open toward the popular culture surrounding her, Sister Corita, in an early act of culture jamming, relied on advertising propaganda for creating new messages which were democratically and serigraphically produced and sold at a low price. Her works, like Kiki Kogelnik’s, Marisol’s, or Niki de Saint Phalle’s, comprise critical commentaries on contemporary events and political contexts such as the Vietnam War.

The ladies of the “Années Pop” present strategies of self-empowerment, celebrate female sexuality and lust, draw on pin-ups, excerpts from consumer culture, and fragments of an occasionally very banal everyday world in a bad girl manner, comment upon social changes, and translate personal issues into political ones in their clearly autobiographically tinted oeuvres. Their proto-feminist works counter the affective death of classical Pop Art and its cool and anonymous style. By also employing a traditional female language of forms, using textiles and ornamental elements, and relying on a naïve imagery, their approach idiosyncratically extends the established canon of art. What they share with this style is the humor and lightness of an attitude toward life whose facets and variations are still unfolding in today’s art.