One of the most widely-discussed artists of the present day. With 'Performance Under Working Conditions' the Generali Foundation presents the first exhibition to set Sekula's present output in relation to his early work. The exhibition, in tracing the entire span of his thirty-year career, also focuses particular attention on his interest in the theatrical, which acts as a counterbalance to the documentary side of his work, and introduces other elements of irony and humor. 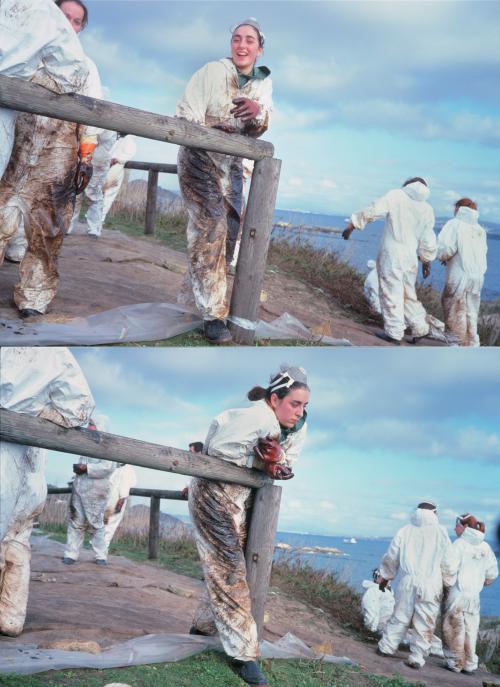 Allan Sekula (born in 1951 and living in Los Angeles) is one of the most widely-discussed artists of the present day. With Performance Under Working Conditions the Generali Foundation presents his first retrospective in Austria and at the same time the first exhibition to set Sekula's present output in relation to his early work.

Sekula, employing at times extensive, conceptual sequences of photographs, has consistently concentrated on political and social themes, with the emphasis on current social problems. The exhibition, in tracing the entire span of his thirty-year career, also focuses particular attention on another, often underestimated aspect of Sekula's ouvre: his interest in the theatrical, which acts as a counterbalance to the documentary side of his work, and introduces other elements of irony and humor.

A primary connection between Sekula's early work and his current creations can be established, at the level of subject matter, in his persistent anti-war attitude.

In 'Two, three, many... (terrorism)' (1972) the artist picks up on a motto of Che Guevara's directed at the Vietnam War. In contrast to other segments of the student movement of the day Sekula transformed the anti-imperialist exhortation to create ''two, three, many'' Vietnams in a number of different artistic expressions: such as that of a man, wearing an Asian peasant's straw hat and armed with a toy machine-gun, who can be seen crawling on his belly through scenes of the public life of the US-American middle class. In War Without Bodies (1991/1996) Sekula documents the intimate tactile inspection by sightseers of a warplane viewed as a tourist attraction. The public arena, which in the meantime has evidently been militarized as a matter of course, seems here to have vanished from sight. In an essay of the same title, Sekula criticizes the contemporary discourse on ''masculinity and the organized use of state power'', citing the example of the Gulf War of 1991. The frequently-employed combination of a written text and photography resolves Sekula's skepticism towards the universal legibility of the individual image in a practical way.

As a theorist, Sekula had pleaded in the late 1970s for a re-invention of documentary techniques. His interest here lay in overcoming the contrast between photographic functionalism, of the sort employed in reporting on social ills during the thirties, on the one hand, and a neo-romantic aestheticism, on the other.
Sekula's attempts at coming to grips with the changes in the working world can be considered as his first works to have involved these theoretical standards. The photographic series This Ain't China (1974) focuses on the working conditions in a restaurant, where the artist had been, in fact, employed. Likewise, in School Is a Factory (1978/80) Sekula refers back to some of his own experiences.
This text, inspired by theories on society-the title of the work goes back to a metaphor of Michel Foucault's-is coupled with photographs, which the artist took of students attending night school classes he had been conducting himself. While Sekula shows his personal involvement in the subject here, in that he picks up scenes from his own environment as a theme, he is, at the same time, concerned about documenting life in general-and the working conditions of a generation disenfranchised by everything, from the school system to the labor market.

The transformation of working conditions also forms the theme of Freeway to China (1998-99). In this instance, it is the changes, triggered by economic globalization, as exemplified in the lives of the dock-workers of Los Angeles and Liverpool. In 23 color photographs of different formats, Sekula documents a series of solidarity actions, industrial strikes and the fates of individual dock workers. As in almost all of his works, Sekula's essayistic texts and photographs complement one another here to form a work rich in philosophical and literary points of reference.

The struggles against globalization find their clearest echo, perhaps in all of Sekula's output, in the series entitled Waiting for Tear Gas (white globe to black) (1999-2000), a documentation covering the protests against the WTO-summit in Seattle in 1999. Likewise, in this context, the sea, viewed as a forgotten place, features as an ever-recurring motif in Sekula's work. Freeway to China, and also Tsukiji (2001) and Black Tide/marea negra (2002) are reminders of the fact that the economic globalization does not just occur in cyberspace alone, but is based on the premise of the slow, actual transport of goods. In his most current work, in which Sekula documents the clean-up job following the sinking of the tanker ''Prestige'' off the Galician coast, he returns to both the content-related criticism and the serial form of some of his earlier works.

Publication (German/English) published by Hatje Cantz with a foreword by Dieter Karner, an introduction by Sabine Breitwieser, an interview with the artist conducted by Benjamin Buchloh and numerous texts by Allan Sekula. Distributed in North America by D.A.P.

With the kind support of The Generali Foundation is the art association of the Generali Group based in Vienna; its purpose is the support and promotion of contemporary art.