The 20th and 21st Century Art Collection. The exhibition in the Muzeum Sztuki 2 focuses on the most important phenomena that are commonly connected with that which is modern. By creating a 'collage' of artworks from different periods it poses questions about how the character changed. 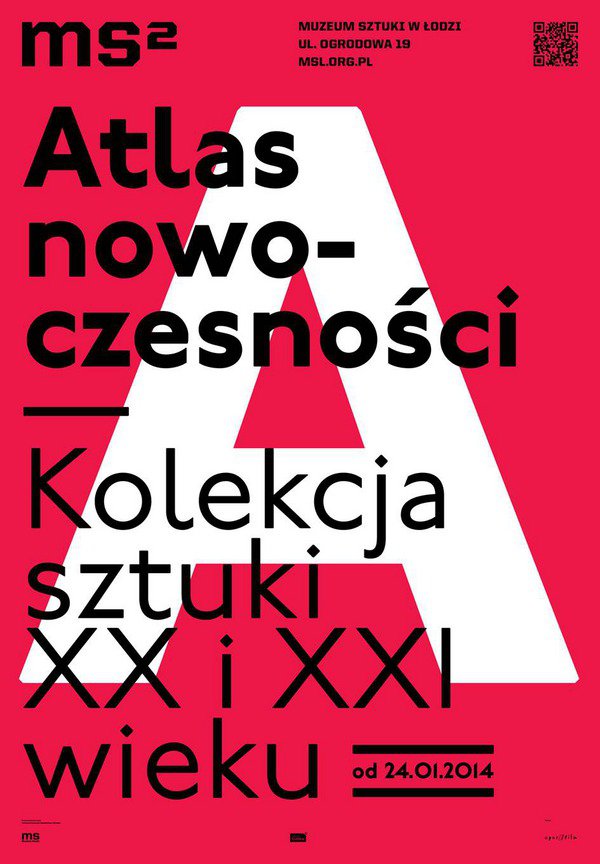 Atlas of Modernity is an exhibition that will allow to see the collection of Muzeum Sztuki in a different way, but, more importantly, it is also a story of modernity and its meaning from a contemporary perspective constructed with the works included in the collection. It's not a coincidence that modernity becomes the object of reflection in the Muzeum Sztuki. There is no other museum in Poland, whose relationship with modern culture would be equally strong.

The end of modern era and the advent of new times – the times when new paradigms were to be applied – has been announced on numerous occasions. However, the world we live in is still to a large degree defined by phenomena, processes and notions that appeared in modernity. Culture, models of scientific knowledge, social reality, forms of politics, economic mechanisms, our ideas of ourselves and, finally, our desires and fears have all been shaped by modernity. Learning about modernity becomes necessary if we attempt to understand the contemporary world and want to find our place in it.

The exhibition at ms2 does not report the history of modernity put in chronological order, neither does it present the history of modern art. It focuses on the most important phenomena that are commonly connected with that which is modern, such as: emancipation, autonomy, industrialisation, capital, urbanisation, experiment, mechanization and revolution. By creating a ‘collage’ of artworks from different periods, representing different aesthetics and artistic attitudes around these notions the exhibition poses questions about how the character of the phenomena changed, how the way they were perceived altered and, most importantly, to what extent they shape contemporary reality.

Atlas of Modernity is yet another stage of the works on the Muzeum Sztuki collection that began seven years ago. The aim of the works is researching, re-interpreting and updating the meaning of the art the collection contains. It started in the years 2007-2008 with the preparation of three exhibitions presenting the collection from three different research viewpoints: political, formalist and psychoanalytical. Since 2008 the collection has been exhibited at the newest division of Muzeum Sztuki, ms2, and their consecutive presentations have departed from both the chronological arrangement of works of art and the idea of a ‘permanent exhibition’. As a part of the works on the collection new projects are underway whose aim is to uncover its potential anew – also as it is confronted with other collections (as it was the case with Correspondences. Modern Art and Universalism exhibition).

The collection was made available to the public for the first time in February 1931 at the original seat of the museum in the city hall at 1 Wolności Square. The “a.r.” group collection were gathered in the years 1929–32 and supplemented until 1938. The initiator and the main driving force behind the action of collecting the donations from the artists was Władysław Strzemiński, a painter and art theoretician actively supported by Katarzyna Kobro, a sculptor, Henryk Stażewski, a painter and Jan Brzękowski and Julian Przyboś - poets. The Collection in its ideological dimension reflects Strzemiński’s artistic preferences, although its final shape was the product of the activities of many people including Henryk Stażewski, Hans Arp and Michel Seuphor.

The “a.r” group collection was a review of avant-garde currents and tendencies of the late 1920s and gave rise to the collection of modern art which are still being supplemented with contemporary works from the field of experimenting art. Invariably open to the present it continues its ideological roots which had led to creating the collection. As a part of the new stage the exhibited works of avant-garde artists from the “a.r.” group collection will include art by Max Ernst, Władysław Strzemiński, Katarzyna Kobro, Kurt Schwitters, Kazimierz Podsadecki, Janusz Maria Brzeski, Teresa Żarnower, Mieczysław Szczuka. The works of (among others) Włodzimierz Borowski, Derek Boshier, Bridget Riley, Christian Boltanski, Joseph Beuys, Ewa Partum, Alina Szapocznikow, Krzysztof Wodiczko, Edward Krasiński, Konrad Smoleński, Cezary Bodzianowski, Liam Gillick, Zbigniew Libera, Zofia Kulik, Julita Wójcik, Artur Żmijewski, Antje Majewski and Allan Sekula, as well as objects and prints from the Museum archives, including a drawing script for the film Jan Matejko by Andrzej Wajda will be placed in the context of issues shaping modernity.