An exhibition featuring electronics works by Tatsuo Miyajima and Ben Rubina. Common to their respective practices is a study of complex communication systems made up of a variety of visual and linguistic texts. 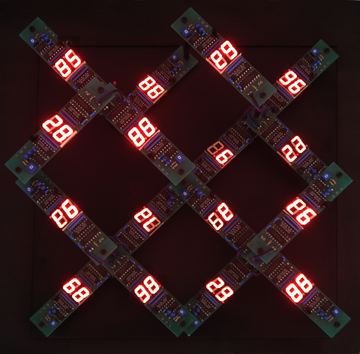 Bryce Wolkowitz Gallery announces Sign Language, a new exhibition featuring work by internationally acclaimed media artists Tatsuo Miyajima and Ben Rubin. Common to their respective practices is a study of complex communication systems made up of a variety of visual and linguistic texts.

The technologies of interactive light systems and changing sequences of numbers comprise the technological and semiotic systems that both Tatsuo Miyajima and Ben Rubin incorporate into their artwork. Reflecting on religion, philosophy and spirituality, Miyajima communicates through conventional symbols for him, the numerical set of 1 to 9 stands as a metaphor for time. New work to be presented in this exhibition includes Counter Me On No.3, 2003. Constructed of neon tubes affixed to a mirrored surface, it forces viewers into direct engagement with themselves as time flashes by. Also on view will be earlier pieces, which incorporate LEDs, such as Counter Circle, 1988, and Monism/Dualism, 1999, with their suggestions of time's circular and linear forms.

The work of Ben Rubin considers digital discourse and exposes the incredible mass of human communication taking place on the web. In Sign Language, Rubin will exhibit new works that reveal a network of phrases and meanings emerging from tubes of light. For Instability, 2004, a response to the war in Iraq, Rubin filtered online news articles five days after the U.S. invasion and extracted the most commonly used phrase: 'The situation is stable.' Also on view will be a brand-new work created from online reactions to the outcome of the upcoming American election.

Polaroids are often the source material for Marty's paintings, which he produces in rapid succession, as if to mimic the photographic process. To create the series of paintings on wood entitled Matar es facil/Suicido en familia (Killing is Easy / Suicide in the Family), Marty asked friends to stage their own deaths by posing with a shotgun. The series Vergenza, humillacion. (Shame, Humiliation.) depicts nearly empty rooms, most of which include only a bed, a cross, and a bible. Even among these few possessions there are visible signs of disorder that suggest a human presence.

Artists' Background
Tatsuo Miyajima was born in 1957 in Tokyo, Japan. He received his undergraduate and postgraduate degrees from Tokyo National University of Fine Arts and Music in 1986. Miyajima came to prominence in the late 1980s with electric constructions of digital counters in the form of light emitting diodes. He is the recipient of grants from the Asian Cultural Council, New York and the Foundation Cartier pour l'art contemporain, Paris. Miyajima has exhibited his work internationally and throughout North America at such venues as the San Francisco Museum of Modern Art and the Modern Art Museum of Fort Worth, Texas. His work is included in such noted collections as the Tate Gallery, London; the National Museum of Modern Art, Kyoto; the Dallas Museum of Art, Texas; and the San Francisco Museum of Modern Art. Miyajima currently lives and works in Tokyo, Japan.

Ben Rubin was born in 1964 in Boston, Massachusetts. He received his Bachelor of Arts in Computer Science and Semiotics from Brown University and a Master of Science in Visual Studies from the Massachusetts Institute of Technology. Rubin is best known for bridging fields as diverse as architecture, interface design and minimalist music. His work explores the means by which digital information takes on physical form. Most recently, Rubin and collaborator Mark Hansen were awarded the Golden Nicaâ€”first prizeâ€”in the Prix Ars Electronica for their acclaimed Listening Post. Rubin has also received the Best Documentary Award from the Third Coast International Audio Festival. Rubin has exhibited in the United States and abroad at venues including the Whitney Museum of American Art, New York; the Next Wave Festival at the Brooklyn Academy of Music, New York; the MIT List Visual Arts Center, Cambridge, Massachusetts; the Smithsonian Institution, National Museum of American History, Washington, D.C.; La Villette Numerique, Paris; and the Center for Art and Media, Karlsruhe. Rubin currently lives and works in New York.

Background on the Gallery
Bryce Wolkowitz Gallery is a new contemporary art gallery based in New York. Primarily dedicated to the exhibition, study, and sale of moving image and photographic works, the gallery also explores developments in painting, sculpture and installation as influenced by these media. Bryce Wolkowitz Gallery is devoted to providing a unique service to collectors and institutions seeking to bring emerging and acclaimed media artists and photographers into their collections and exhibition programs. The gallery, a 2,400 square foot space designed by architect Michael Gabellini, opened to the public in September 2003. Bryce Wolkowitz Gallery is located at 601 West 26th Street, Suite 1240, and is open Tuesday - Saturday, 11AM â€” 6PM.