The retrospective will be set out in a deliberately nonchronological sequence, showcasing paintings, sculptures, drawings, photos, videos. The artist's short career, spanning the years from 1980 to 1990, is viewed as a whole. A big ensemble of more than a hundred drawings reveals the diversity of Haring's graphic world and the directness of his style, expressing sincerity and passion by means of a continuous and consummate line. Curated by Gianni Mercurio. 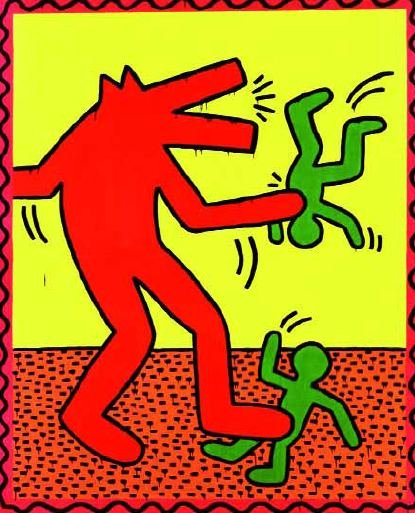 This exceptional exhibition has been entrusted to the Italian curator Gianni Mercurio and is being organised in close collaboration with the Keith Haring Foundation in New York. It presents an unprecedented ensemble of works from the most important American and European collections, both public and private. The retrospective will be set out in a deliberately nonchronological sequence. The artist's short career, spanning the years from 1980 to 1990, is viewed as a whole. Like Keith Haring in his own work, filling the canvas, putting his art in the most unexpected places, covering even objects and bodies, the exhibition will take over the museum, taking possession of the spaces in order to immerse visitors in the colourful, dynamic and teeming world of this artist. It comprehensively deploys Haring's practice, including its essential paintings on tarpaulin and its monumental paintings (including the canvas made in 1987 for the Casino at Knokke-le- Zoute).

Most of all, though, it allows visitors to discover the extraordinary diversity of the supports and media that Haring used so freely - vinyl paint, acrylic enamel paint, chalk, ink, felt pen, on canvas, metal, paper, wood and even the human body (including that of Grace Jones in 1985). A big ensemble of more than a hundred drawings reveals the diversity of Haring's graphic world and the directness of his style, expressing sincerity and passion by means of a continuous and consummate line. The influence of classical art is manifest here, as is that of African, Asian and South American cultures. The exhibition conveys Haring's open, cultivated mind, as manifested in his formally diverse works nourished by his encounters, readings and the places discovered on his travels. Whether on relatively classical supports (canvas, paper, metal, etc.) or more unexpected ones, such as the BMW, also presented in the exhibition (“Original Keith Haring Object Z1”, 1990), beyond the apparent gaiety of the images we are aware of Haring's interest in the big issues of the day: AIDS, drugs, the power of money, etc. For Haring worked at the heart of everyday life.

There are, too, moments of questioning and revolt: the apocalyptic visions and monstrous creatures in his work transcribe the scourges of the modern world, such as the nuclear threat and the AIDS virus, and heighten the intensity of his very personal iconography. Never before seen by the general public, the series of paintings on fences are highlight of the show, as are the “Subway Drawings” (some only as photographs, the originals having sadly been destroyed). This exceptional ensemble, made on a construction site fence in New York, shows the artist's powerful need to occupy urban space and to break free of the cultural milieu and the art market. In the same vein, and specially reinstalled for the exhibition, his astonishing “Pop Shop Tokyo” (1985) illustrates his desire to make art accessible to all and surrounds us from floor to ceiling with the incredible shop where he could make his work directly available to the general public. To complete this teeming ensemble - to which must be added the monumental sculptures - projections and an exceptional series of photographs shed light on the production of Haring's work.

A video entitled “Haring ALL OVER” closes the exhibition. The film, shown on several screens, presents tributes to the artist as well as interviews never shown before. These images take visitors to New York, Chicago, Philadelphia, Paris, Düsseldorf, Berlin, Antwerp, Knokke-le-Zoute and Monaco, where Haring made interventions in public space. The itinerary ends in Pisa, where the artist made his last mural painting, “Tuttomondo”, only a few months before his death. Faithful to the spirit of Keith Haring, who worked to make art accessible to all, the sequence continues outside the museum with an exceptional presentation at the Treasure’s room of the museum of Fourvière, of the big altarpiece he made in 1990.