Separating Light from Dark. The american artist presents in this solo show his most recent works: on display are 25 never-before-seen enamel on aluminum paintings and the series 8 Day Week from his exhibition at the Pennsylvania Academy of Fine Arts. 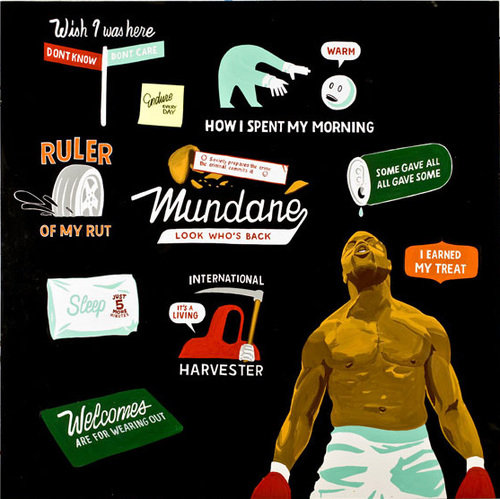 Galleria Patricia Armocida is proud to present Separating Light from Dark, the first solo exhibition in Italy by the artist Steve Powers, aka ESPO (Philadelphia, 1968), opening on Wednesday September 10, 2008 at 6:30 PM. After participating in the 49th Venice Biennale in 2001, Powers returns to Italy to present his most recent work: 25 never-before-seen enamel on aluminum paintings and the series 8 Day Week from his solo exhibition at the Pennsylvania Academy of Fine Arts in Philadelphia in 2007.

His is an unmistakable style reminiscent of the graphic esthetics of 1950s hand-painted advertising signs combined with a raw, sharp visual language, and ironically pungent texts. In his most recent works, the artist plays with the concept of sacred and profane, the amazing and the mundane. Separating Light from Dark is not only a reference to a biblical passage from Genesis where God, on the first day of Creation, separates the light from the darkness; but also a reference to the most ordinary, banal, and earthly act of separating the lights from darks when doing laundry.

The combination of all the works on display adds up to 25/8, which implies an impossible work rhythm: 25 hours a day, 8 days a week as opposed to 24/7. An extra hour a day, an extra day a week, extra time that does not exist which links the Stakhanovism of New York, the city that never sleeps, to the biblical story of Creation. Through a clever and humorous wordplay, the days of the week aren't Monday, Tuesday, Wednesday, Thursday, Friday, Saturday, and Sunday; but rather Mundane, Duesday, Whensday, Thirsty, Frieday, Sadderday, and Someday.

Steve Powers' work addresses the trials and tribulations of contemporary lived experience: love, hate, frustration, desire, insecurity, jealousy, rage, struggle, and the confusion of human experience. In Studio Gangster, the catalog for his solo exhibition in Philadelphia, the artist writes: "The result are maps of the emotions that guides us toward divinity and doom. For all the cynicism that is on display in my paintings, there is an equal amount of faith and love. I believe the work depicts both sides of humanity; We' re capable of greatness, but we usually just screw things up".

Stephen Powers was born and raised in Philadelphia, then moved to New York City in 1994. After publishing On the Go Magazine, authoring the book The Art Of Getting Over, and being a full-time graffiti writer, Powers opened his studio practice in January of 1998. Since then he has shown at The Institute of Contemporary Art in Philadelphia, Deitch Projects, The 49th Venice Biennale, and The Luggage Store in San Francisco. In 2003, he founded the Dreamland Artist Club and partnered with Creative Time to commission over 45 artists to paint signs and rides in Coney Island. His book of pop art short stories, First And Fifteenth, was published by Villard in 2005. As a 2008 Fulbright Scholar, Powers painted a love story in the streets of Dublin and Belfast. He lives and works in Manhattan.