Warhol TV: this exhibition is a giant zap through Andy Warhol's television universe. A journey through the artist's obsessions, his fascinations, his loves, his surprises and fears. The young artist Mika Rottenberg presents her video installations in different spaces throughout la maison rouge. Marie Denis proposes to take over the patio with 5 majestic sculptures of box-tree balls set inside immaculate domes. These immense emerald-coloured jewels are a fusion of very different worlds. 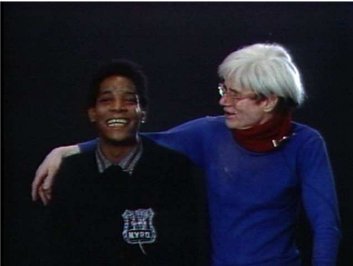 Andy Warhol, the Pope of Pop, had always been fascinated by television. A means of communication that was contemporary and massive. An ideal tool for artistic promotion, social promotion, for self-promotion.
It was his big dream to have his own television show. A program he would be in control of, but that would also allow him to have control over his own image.
As early as 1964 he made an imitation soap opera, to which he added real "adverts".
At the beginning of the 70s, he played around at producing telenovelas that were the reflection of his aesthetic and fantastical universe.
In 1979 he put together a small team who were in charge of creating TV programs to be aired on the brand-new New York Cable. This team, including Vincent Fremont, Don Munroe and Sue Etkin, created Fashion, a talk show devoted to the fashion world, followed by Andy Warhol’s TV, a Factory style reality-TV show, before producing the famous Andy Warhol’s fifteen minutes, inspired by his renowned quote on the subject of fame.
This exhibition is a giant zap through Warhol's television universe. A journey through the artist's obsessions, his fascinations, his loves, his surprises and fears.
In 1987, the TV broadcast of Warhol's funeral service became the tragic final chapter in the life of the man who had so desired to be on screen, to be, as we say, on air.
Warhol's television no doubt represents the last unexplored aspect of this taboo-breaking artist's work.

With the support of Vitra and MTV Idol

For her first solo show in France, the young artist Mika Rottenberg (born 1976 in Buenos Aires, lives and works in the United States since 1991) presents her video installations in different spaces throughout la maison rouge.

Mika Rottenberg's videos portray production systems for which labour is provided exclusively by women whose body is both raw material and tool. She analyses, not without humour, notions of alienation and exploitation of the female body, drawing the spectator deep into these endlessly productive enterprises. She shows her videos inside installations that allude to the films by reproducing their decor.

Each winter, les amis de la maison rouge produce a work specifically for the foundation's patio. This year, members were invited to vote for one of three artists, selected by Aurélie Voltz, an independent curator chosen by the board of the society of friends.

"Marie Denis proposes to take over the patio with five majestic sculptures of box-tree balls set inside immaculate domes. These immense emerald-coloured jewels are a fusion of very different worlds: that of topiary, which is the art of clipping evergreen shrubs and trees into shapes, and that of agricultural machinery, from which the dome-silo has been taken. This unexpected encounter is nonetheless rooted in a world of similar, universal shapes: the sphere. Marie Denis revisits this timeless geometric form, used from classical gardens to the decoration of town squares and roundabouts, confronting two elements to introduce a poetic force. The patio, which is almost submerged by these oversized sculptures, resembles a waking dream."(Aurélie Voltz)