Fotogalerie Wien is dedicating 3 exhibitions to this years theme Women on the topics everyday life, mother, and body. The exhibitions are thereby taking into account a development that has been becoming ever more apparent over the years: artists are (again) dealing increasingly with specifically female matters. A show with the title everyday life forms the prelude of this ambitious project. 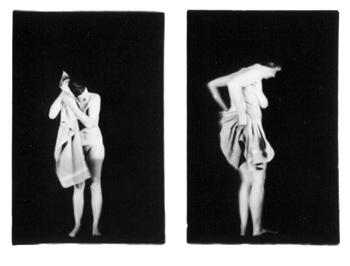 A quite normal reality
Womens everyday life in focus

Fotogalerie Wien is dedicating 3 exhibitions to this years theme Women on the topics everyday life, mother, and body.
The exhibitions are thereby taking into account a development that has been becoming ever more apparent over the years: artists are (again) dealing increasingly with specifically female matters.
They are grappling with various aspects of womens existence and are focussing on motifs which the cultural mainstream does not deem as worthy images of depiction.
The artists interest lies in the private life which is becoming the preferred field of aesthetic research. The diversity and quantity of the contributions make an initial investigation that inquires of the motives and possibilities of contemporary art seem necessary, to solicit attention to the increasingly threatened project of equal rights.

A show with the title everyday life forms the prelude of this ambitious project, that combines the works of media photography, video and installations of eight artists from Germany, the USA and Austria.
The selection of works presents a trail through the private fields of perception. And suddenly insight is given on the moments of importance in womens lives.

In picturesque picture sequences Iris Andraschek prefers to photograph her own life.
The photographs, which have been laminated and bound into picture books, depict everyday situations that permanently recur in private life. In the technically manipulated close-ups, the scenarios of a quite normal reality that were partly encountered as is and partly arranged - begin to vex and to blur into a mysterious, strange grotesqueness.

Heidi Czipin portraits handbags. Viewed from an always constant perspective, the handbags which have been cautiously opened by a woman's hands - unconsciously awaken associations to the female sexual organs.
Our gaze is then averted to an open and yet hidden inner, to the last remnants of privacy. This spurs our curiosity onto undiscovered secrets and incites to speculative conclusions about the owner, who remains anonymous.

Simonde Demandt deals with functionally altered recycling, whose form-manipulated prints illustrate chip baskets on a 1:1 scale and whose interior are lined with women's magazines.
By being confronted with womans longing of the luxurious, with which the commercial glossy magazines terrorize us, the balance of power such as in socially contrived gender roles - becomes oppressively transparent with the cheap baskets for fruit and vegetables woven by women's hands.

In her picture sequences, Rita Fabsits works with the colour red and isolates highly symbolic details which relate to the female body. A blood-soaked tampon is illustrated without commentary next to a woman's hand gripping the folds of a dress.
Lovingly draped textiles represent sensuality. A vaginally connotative flower motif accompanies the view of the bared shame of a squatting menstruating woman.

Laurie Long acts as a spy in matters of love; she staged her dates with potential partners into performances and filmed them - including her comments on the respective situation - with a buttonhole camera. Private life, declared as artistic project, allowed her - as she is fully occupied with earning her living and creating art - to give in to her individual needs and to study, moreover, the functional mechanisms of internalized gender roles .

Anja Mafredi creates contemplative genre-paintings at the centre of which are women. They dominate in quiet contemplation without turning to look back at the viewer, the compositions complex in form and in content. Each of the economically used form elements in the bright rooms - accurately described to the smallest detail - is pregnant with meaning and supports the central moral message of the pictures: in the western worldview, sensuality must be controlled.

Fiona Rukschio documents the different manifestations of violence in her documentary photo and video works. In the individual example of a woman dressing up, what women most commonly do unto themselves is brought forward on the one hand. On the other hand contemporaries describe personal experiences with psychological and physical male violence and lift the blanket of silence spread over a social taboo.

Moira Zoitl investigates with the methods of Oral History the occupational paths of employees of different social and age groups. Her installation, which is equipped with photo works and video films, reflects upon women and how they assert themselves in spite the discrimination they experience in their professional lives. However, the impressive homage to self-confident stubbornness also makes the nuances in the claims of their interview partners clear.

The strategies which the artists use are extremely differentiated.
The picture-forming procedures range from participatory observation to subtle staging, from minute documentation to affirmative super-elevation, from objective analysis to critical alienation. Concerning the manifestations of the works it becomes apparent that the single picture loses meaning.
Certainly, still lives and genre representations are represented in monumental tableaus. But picture series and combinations of the different media which, however, do not claim to be complete representations, are in the majority.
This takes into account the experience that in the age of the electronic media stories have long since been replaced by catalogues.
The clever collection of pictures, each of which courts the attention of the public for itself, shows accordingly no dramatisation or sequencialisation. It is an infinite loop and functions like a data bank. Creating correlations that make sense between the disparate information in the pictures remains a matter of how the receiver interprets it.
Edith Almhofer