Identity and Straging Strategies. In this show, the artists themselves are the protagonists at the center of their own photographs and videos. The artists' sequence of actions, with only a few exceptions, were performed solely for the camera without an audience and are made accessible and tangible to the viewers through photography and video. The view through the camera allows for perspectives that would otherwise be impossible during the live experience. 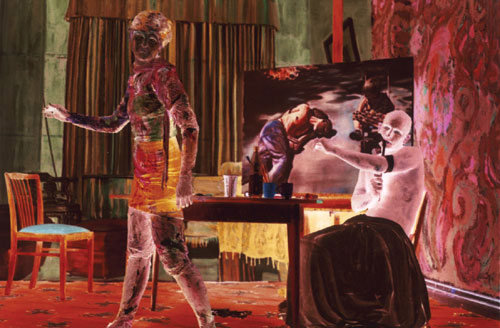 FOTOGALERIE WIEN’s thematic focus this year addresses PERFORMANCE IN IMAGE AND IN MEDIA TRANSFER. The title of this exhibition series refers to the complex relationships between performance and image: the ephemeral quality of performance in its form as a sequence of actions as it relates to the capturing of performance in representational media such as photography and video. In contrast to traditional perspectives that define performance as the simultaneous presence of both artist and viewer in one space and time, the three exhibitions primarily present performances produced for the camera, or performative installations. As a result, the opportunity for alternative responses to performance is made possible.

In the first exhibition PERFORMANCE I – Identity and Staging Strategies, the artists themselves are the protagonists at the center of their own photographs and videos. The artists’ sequence of actions, with only a few exceptions, were performed solely for the camera without an audience and are made accessible and tangible to the viewers through photography and video. The view through the camera allows for perspectives that would otherwise be impossible during the live experience. The performative installation transmits or, more precisely, produces the performance using various media: through interventions within the exhibition space as well as through the use of video projections. In the form of an installation within the gallery space, the visitors are surrounded by the performative installation and find themselves in the middle of the performance.

In the performative installation from the artist collective from Berlin and London, Artists Anonymous, images and words dealing with themes of violence, excess, the victim, the perpetrator, private, public, psycho-strip via television, and the crime scene in the living room fuse into a performance. The artists attempt to break new ground in performance not only by intertwining video and installation, but also by other technical means: The negative image, an essential aspect of their performances, is only possible with video and photography.

The ten monitors used in Miriam Bajtala’s video installation, ich und andere leuchten, function as sources of illumination – the screens display various models of lamps and the artist herself, who turns into these lamps. These video sculptures convey transformations in which subject and object exchange roles or, more precisely, blend into each other: The human body becomes a swiveling object, while the lamps gain a personality.

Peter Dressler’s picture story Business Class depicts unconventional actions in a hotel room: The artist, respectably dressed and operating discretely, dismantles the furniture and the shower of the room, and then attempts to pack some of these furnishings, such as the bed linen, into a suitcase. In Dressler’s photo stories and artist’s books, the norms of legitimate action are challenged with a sense of irony.

Judith Huemer’s video installations offer various approaches to understanding how language limits and controls individual identity. In Judith, du bist ja keine 17 mehr, the artist linguistically appropriates the reprimand: “Judith, you are not 17 anymore”. She contrasts this statement with a corporal performance whose force, continuing to physical exhaustion, is reminiscent of a childish response to a rebuke, a “you asked for it” kind of response. Tourist_Terrorist_Artist, a work that originated as a reaction to the difficulty personally experienced while attempting to obtain a visa in the U.S. as an artist, illustrates how very fine the line is between stereotypes and attributes of identity.

Johanna Kirsch’s video No Track Walk 1.0 emerged from a five-day hiking experiment, in which the artist attempted to avoid all marked paths. The video not only shows the absurd and at times reckless possibilities involved in the creation of a new path, it also offers unusual perspectives of a seemingly familiar landscape.

In three of Michaela Moscouw’s videos, Candy, store storage storten and tülfüle, viewers observe the artist as she builds a washing machine out of cardboard, as she creates a kind of photogram with tulle and earth on the surface of an icy riverbank, and as she destroys a photogram while loudly proclaiming a monolog. Serial photography, a familiar method for Moscouw, functions effectively in the videos, exhibited for the first time. Time, as well as the protagonist, plays a major role in the videos: This becomes evident in the form of the artist’s perseverance, but also manifests itself in the viewers’ perseverance to observe.

Nina Rike Springer’s animations, such as Tanzgrafik and Springschnur Springer, show actions that appear absurdly unreal and familiar all at the same time. The depictions of the narrator’s individual states of mind, expressed in colorful animation-style sequences of movement, defy the everyday perceptual patterns by interweaving the comical and the serious, intertwining the familiar with the yet unseen.

In her performative installation, Frame of reference – or – corner myself in a dead end street and i will turn and bite, Jennifer Wille addresses a break with the imposed norms of the art field. The blue that the artist uses to fill a corner in the gallery space – all the while retreating more and more into the corner – serves as a reference to that which has already been done, the great icons of art history. Initially, the protagonist appears to be literally forced into the corner of the artistic frame of reference, but in a final act of liberation, she leaves the corner and with it the limits of the frame.