9 I hired a contract gallerist.

16 The power of language and the language of power

19 The Hiring hall: refund your trip!

Venice and China are not so far apart after all, despite the time zone, the different light and the almost opposite seasons. Two friends have managed to bridge the gap, opening points in space without seeing or speaking with each other, as through mental coordinates. Around Anna there was us and the swinging raft, while around Bignia there were exotic landscapes and curious passers-by. The colored dots have disappeared by now, damaged by rain and time. Only those private moments and impressions have been transcribed. 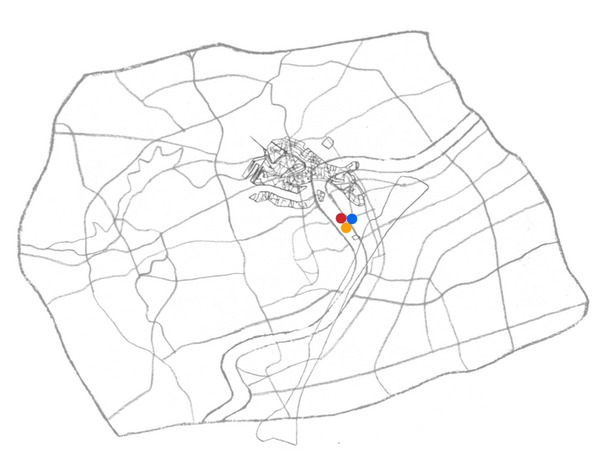 Starting time: 12 am Italian time/ 6 pm Chinese time Place: Osloo Pavillion, San Servolo Island, Venice/ Dong Chang Riverfront Garden, Shanghai Three chosen points on the Osloo pavillon in Venice – a blue point, a red point and a yellow point – have been simultaneously inaugurated to three corresponding points in Shanghai at the Dong Chang Riverfront Graden. During the inauguration of the blue points, between the two places a stream of messages have been exchanged and publicly read by two speakers standing beside the points. We Are All Hanging on Cartesian Vortexes is part of “Mapping a Common Place”, a series of appointments between Anna Forlati and Bignia Wehrli in the cities of Berlin, Dresden, Hang Zhou, London, Macerata, Milan, Paris, Shanghai, Turin, Venice.

B: Shanghai, Dong Chang Riverfront Garden, 6 pm, she is lighting a cigarette A: There is a shiny blue point on San Servolo Island

B: On the bench in front of the river a man is giving a massage to the shoulders of an older woman. A: The lagoon has a light green color 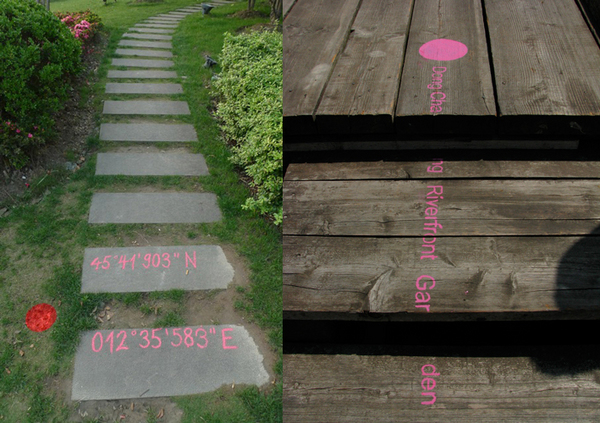 B: She is clapping her hands, a woman is jogging in front of us. I still don’t know the name of this bird. A two boats conversation again. A: My mother is looking at me. I wonder how she feels 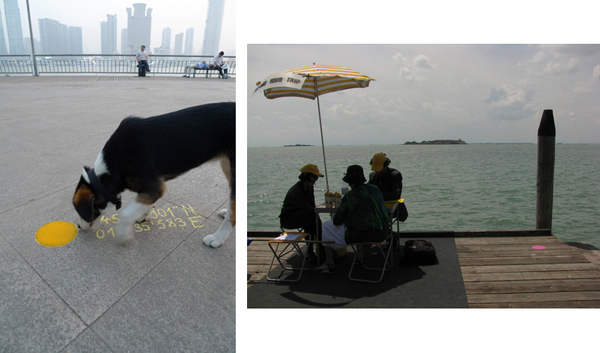 B: The sun looks beautiful. It is directly ìn your direction A: She has a strange hat

B: What did you tell me about your mother? I’m wandering if it’s still raining over there A: I am sitting patiently on the wet floor. Francesca is reading your messages and smiling 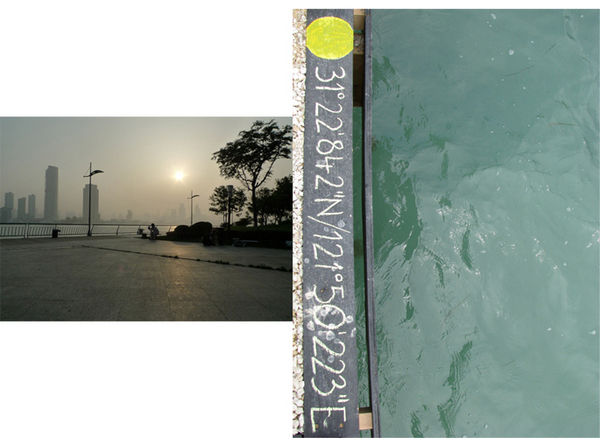 B: I start to walk and see the sun’s path on the water. Her voice is so small that I nearly can’t hear it A: The sky is blue. Waves are moving us. While woman starts painting on a canvas, I hear a terrible sound behind me.

B: I can’t swing my arms when I write messages. I imagine that under the thin sunlight in China everyone is swinging his arms. A: Nothing new seems to happen around me. I wish I could tell you about gamu birds flying over me 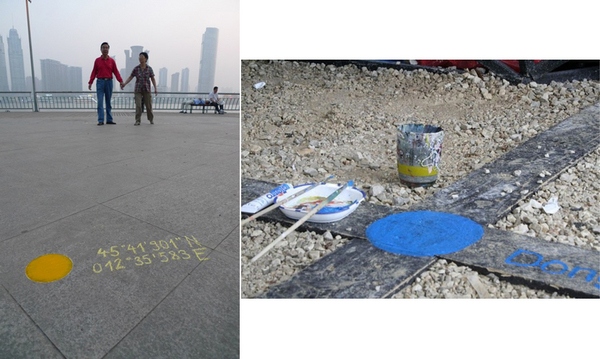 B: Now the point is getting darker. The red one I painted on the grass. I would like to show you the high houses on the other riverside A: The sand around it is brown and wet

B: Nearly no boat anymore, no cargo ship as before A: A lot of wind. Ciao